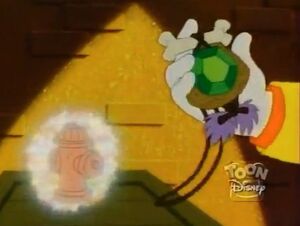 The magic crystal amulet is a jewel in the possession of the witch doctor. Its magic is that it can turn clay statues representing other structures into remote controls for said structures. The amulet is activated by rubbing the green gem.

The magic crystal amulet's origins are unknown. It may have been made or inherited by the witch doctor, who is the current rightful owner. He's happy with the power it grants him, but also takes his job as protector of those powers seriously.

The magic crystal amulet is a necklace constructed around a green gem that may or may not house multiple spirits. The amulet alone is worthless. What one needs to do is make a small statue of clay of an object one wants to manipulate and then use the amulet on the clay statue by rubbing the gem. The clay statue then provides life to the object it represents. This can happen without further intervention from the user, but the user can also manipulate the statue to control the object. One statue can be tied to multiple objects as long as they're identical to one another. Objects return to normal on the spot if their statue is broken. It is unknown if anything other than clay also works as construction material.

One day, the witch doctor shows the magic crystal amulet's power to two guards by creating a clay sculpture of the nearby volcano. He first activates it, then deactivates it. Negaduck happens to be hiding nearby and witnesses the amulet's power. He steals it and makes the three men think Darkwing Duck is to blame, leaving him free to return to St. Canard to play around with his new toy. His first course of action is to bring life to the two lion statues in front of the hotel that hosts the meeting of the Darkwing Duck Fan Club. They cause enough scares and damage, but Negaduck drops his clay statue when the witch doctor and guards arrive. This returns the lion statues back to normal and the clay statue's fragments are found by Darkwing. They're a clue he doesn't know how to interpret, but that's not necessary as Negaduck soon crosses his path again. While Darkwing is enjoying a parade in his honor, Negaduck uses the magic crystal amulet to open up the fire hydrants and flushes the streets. Darkwing sees him this time and comes after him, but Negaduck has another clay statue ready: one of a Hamburger Hippo joint. He brings the nearby outlet to life and has it eat Darkwing, Launchpad, and Gosalyn. The three escape, but are visited in Darkwing Tower by the witch doctor. His words finally make Darkwing realize what Negaduck's been doing and he promises to get the amulet back. In the meantime Negaduck steals two tons of clay to make the most of the amulet. He takes his yacht up Audubon Bay and sails up to Audubon Bay Bridge, which he turns alive to destroy the city with its greatest landmark. Darkwing's team flies out in the Thunderquack, but Negaduck has a statue ready and rips the wings off. Darkwing still lands on the yacht and takes the amulet from Negaduck before he can do more harm with it. After defeating the villain, Darkwing returns the amulet to the witch doctor. Bad Luck Duck

Retrieved from "https://darkwingduck.fandom.com/wiki/Magic_crystal_amulet?oldid=17713"
Community content is available under CC-BY-SA unless otherwise noted.