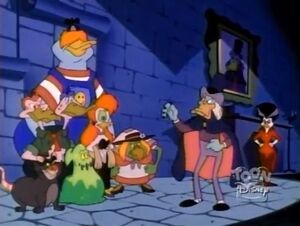 The Macawbers are a family of heritage and wealth which roots lie in Transylvania. They are monsters and like many of their kind look down on normals, although under Morgana's guidance they've become slightly more open to them. Many of the Macawbers possess magical powers, as the family regularly provides students to the ancient Eldritch Academy of Enchantment. In fact, several of them work at the Academy.

While every member of the family has at least two lines, almost only the voice actors of the recurring ones are known. The cat is voiced by Frank Welker. Blobby is voiced by Jim Cummings. The cyclops is voiced by Kath Soucie.

The Macawbers, or at least a branch of the family consisting of eight individuals, live in Macawber Castle in Transylvania. Morgana lives in St. Canard, but Macawber Manor holds a portal to Macawber Castle for her to use as she pleases. For the most part, it is not known how these nine individuals are related. Moloculo is the father of Morgana and is the head of the Macawber Castle household. Nasty is called "aunt" by both Moloculo and Morgana, so she's likely Moloculo's aunt and Morgana's great-aunt, although she could as well be several generations older. Monsters R Us Globby is Morgana's cousin. Malice's Restaurant By virtue of being two heads on one body, Screamy and Meanie are presumably brothers. Due to similarity in hair and skin color as well as the uncertainty how many eyes the big guy has, he and the cyclops could be siblings. Monsters R Us

There's been a long state of hostility between the Macawbers and the people of the nearby town. Morgana stuck with monsters and demons too when she moved to St. Canard, but her good experiences with Darkwing Duck and bad ones with her usual social circles changed her outlook. Fungus Amongus Ghoul of My Dreams Before long, she formed important bonds with various normals and even became their protector as a member of the Justice Ducks. Just Us Justice Ducks, Part 1 Just Us Justice Ducks, Part 2 She kept largely quiet about this to her family until her hand was forced to reveal she was dating a normal. Her family passive-aggressively disapproved and Darkwing did not respond with patience either, causing a conflict that through circumstances spread to the town and undid the stalemate agreed upon prior with a literal line between for each group to stay at their side of. After reasoning failed, Morgana let her anger and powers speak to force everyone to listen to her. The outcome was an agreement between the townfolk and the Macawbers to turn Macawber Castle into a tourist attraction that benefitted all. Monsters R Us

The Macawbers loosened up after this, although anti-normal sentiments crept up at times in the presence of other monsters. Hot Spells Morgana's own steps towards normals brought forth an idea to open a restaurant, The Shadow Chateau, with which she was aided by Nasty and Globby. While the monsters worried the normals at first, their food and atmospheric presentation won them over. Malice's Restaurant

Very little is revealed about the various Macawbers as individuals. Moloculo is old-fashioned and authorative, and generally interested in ways to increase his fortune. Monsters R Us Nasty is a teacher at the Eldritch Academy of Enchantment Hot Spells and an over-enthusiast cook who'll make a meal out of anyone who is distracted for more than two minutes. She appears to be the oldest of the nine and enjoys respect equal to Moloculo's. Monsters R Us Globby seems to be a student at the Eldritch Academy while Morgana is an alum. Hot Spells The cyclops is an organ player of some skill. Monsters R Us

The Macawbers are not necessarily withdrawn, but their preference for other monsters when their immediate neighbors are normals does give them a preference to stay home. Among each other, they simply try to be a good family, eating together and playing games together. Monsters R Us

Morgana visits Macawber Castle through the portal in her home, but forgets to lock her own front door. Darkwing, Gosalyn, and Launchpad stop by for a surprise visit and accidentally stumble through the portal right among the Macawbers while they're playing a game of hide-and-seek. Morgana tries to get them to go, but when Darkwing lets it slip he's her boyfriend and Moloculo shows up, she stands up for her companions. Moloculo agrees to invite them for dinner, if with the intent to chase them off. Gosalyn and Launchpad actually have a good time, but Darkwing's dislike of monster food combined with the all-but-subtle taunting of Moloculo brings trouble. When the argument becomes a matter of normals vs monsters, Moloculo changes all three guests into monsters to show them they don't have what it takes to live a monster life. Darkwing becomes a poodle-like wolf, Gosalyn becomes a Frankenstein's monster, and Launchpad is turned into a vampire bat. Furious, Darkwing leads his family outside of the castle to seek help for their alteration elsewhere. However, old resentment from the townfolk to monsters reignites their war once they spot the three on their turf. They return to Macawber Castle where they get into an argument with the Macawbers how to fight the townfolk. Everyone ignores Morgana's urging to find a peaceful solution and Moloculo's and Darkwing's groups split up to deal with the townfolk separately. It does not work out at all, so the two groups join forces, again ignoring Morgana. Out of patience, Morgana uses her full power to singe all parties and force them to listen to her proposition for a long-term, mutually beneficial cooperation. Macawber Castle is opened up as tourist attraction under the name Monster Castle and the profits split between the townfolk who do the work and the Macawbers who own the place. Monsters R Us

Morgana is asked by the Eldritch Academy of Enchantment to do a presentation on a groundbreaking paper she's recently published: "Warts and Boils: Medieval Hexes Redefined for a New Age". For this special moment, Morgana invites Moloculo, Nasty, Globby, Darkwing, and Gosalyn. On her father's advice, the group leaves Gosalyn in Nasty's care to experience a class on magic, specifically the creation of simple familiars, which also allows Darkwing's hands free to help Morgana set up her presentation. Gosalyn, however, lacks the patience to sit through the math and chemistry and accidentally creates chocolate pudding instead of a familiar. Humiliated by Nasty and the class for both her failure and being a normal, Gosalyn stomps out and meets with the janitor, who's actually Beelzebub in disguise and angling for Darkwing's soul. He manipulates her into a debt and later abducts Morgana when she tries to interfere. During a presentation, he opens a gate to Hell, defeats the entire audience of the presentation, and gives Darkwing the choice to trade his soul for Morgana's. Darkwing accepts. Once Beelzebub has left, Morgana insists that Gosalyn can't have known what she was doing and, because this is true and therefore Beelzebub's contract void, the combined brainpower of the academy works on a plan to open a portal of their own and get Darkwing back. It is successful and makes for another event that improves Darkwing's and Moloculo's relation. Hot Spells Morgana opens up a restaurant in Macawber Manor and receives help from Aunty and Globby. Darkwing hates everything about the atmosphere and the food and is convinced all of St. Canard will share his opinion. To spare Morgana failure, he invites the Cute Little Lost Bunnies to make the place nicer. Morgana is highly upset when she hears about this and confronts Darkwing with his constant rejection of the monster side of her. Forced through circumstances, Darkwing invites her, Nasty, and Globby to a barbeque with the Muddlefoots to prove he's not ashamed of her. The Muddlefoots are initially wary of the Macawbers, but the monsters easily win them over with their food and general kindness. This despite Drake's constant attempts to supplant the monster food with normal food. Morgana again has to confront him about his nonsense, but she takes well to Drake admitting that it isn't that he's ashamed of her but that he wants to protect her from disappointment. She forgives him, but it's only so long before Darkwing goes back to his old self. At opening night, he tries to bribe the food critic and it turns out he has forgotten to cancel the Cute Little Lost Bunnies, which costs Morgana her good review. To make matters worse, Negaduck is after the bunnies and sneaks into the kitchen to put an attack squid among the food. All guests flee when they are served the hostile creature, which abducts the bunnies, leaving the Macawbers with nothing to do but clean up while Morgana goes after Negaduck. Malice's Restaurant

Retrieved from "https://darkwingduck.fandom.com/wiki/Macawbers?oldid=25262"
Community content is available under CC-BY-SA unless otherwise noted.