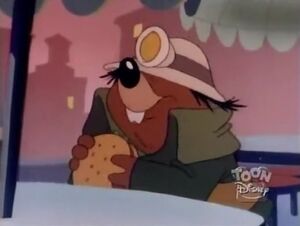 The long-haired mole is one of Professor Moliarty's many soldiers. He's socially not the brightest and likes burgers better than mushroom and fungus pie.

The long-haired mole used to live a quiet life in the burrows underneath St. Canard. Then Moliarty rose to power as he organized the moles into a community with the singular goal to concur the surface one day. The long-haired mole appreciates the new society.

While as intelligent as the next mole, the long-haired mole does not easily pick up on social cues. He is also quick to trust.

The long-haired mole has two distinguishing traits: black hair pushed down by his helmet to the point that both cover his eyes and prominent front teeth. Otherwise, he has the common mole body shape and fur color. He also wears the standard green soldier uniform.

Before activating the Kineto Beam, Moliarty holds a speech on how his creation will plunge the surface world into darkness and urges the moles to prepare for a surface life by buying his sunglasses and tanning butter. All moles realize that doesn't add up, but only the long-haired one dares ask why they'd need that stuff if the sun is gone. Moliarty throws an anchor on top of him in response and the long-haired mole retracts his question. Hours later, the army has taken over St. Canard and the long-haired mole and two colleagues celebrate by eating burgers. Meanwhile, each member of Darkwing Duck's team puts in effort to steadily defeat the mole army. Gosalyn dresses up as a waiter to tempt the moles into taking curry and chili pepper sauce with their meal by presenting it as a surface word delicacy. The three take the bait and the sauce takes them down. "That Sinking Feeling"