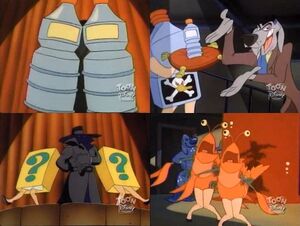 The Liquidator's mascots, once Bud Flood's mascots, are two women who serve as mascots for the drinks his company puts on the market and even for the Liquidator himself. They dress up as various objects and sing catchy tunes that relate to whatever their boss is talking about at the time.

They are voiced by Darleen Carr and B. J. Ward.

The two women found their way into Bud Flood's employ prior to the production of Sparkling Crystal Pure Flood Water, for which they did the jingle. It appears they write their songs themselves and in general perform their job with artistic independence. They became involved in his sabotaging of the competition as backup. After the accident that turned their boss into the Liquidator, they became something of his personal cheerleaders in addition to their company mascot job. As with the sabotaging, they have no active role in the Liquidator's crimes, but they are present to provide a catchy tune for the occasion, including cases of (attempted) murder.

The mascots are professionals who do what they're paid for and don't bring in any moral limitations to the company's endeavors. They're creative and can think up an appropriate act on the spot. They work well together.

When they are on the job, the women wear whatever kind of costume works to illustrate the Liquidator's speeches. It is unknown what they look like beyond their limbs. Those are salmon-pink, and the overall picture suggests they are medium to tall in height.

The mascots accompany Bud Flood when he hosts a presentation for the Soft Copy and come with him that night to the Coo-Coo Fizzy Pop Bottling Factory to eliminate the final competitor. Darkwing Duck shows up to stop him, at which point they dress up as bottles with dangerous content to assist their boss's remarks to Darkwing. When Flood falls into the vat of poisoned water, Darkwing doesn't bother to arrest the mascots, leaving them free to help him prepare his revenge when he emerges as the Liquidator. The Liquidator pulls Darkwing into the sewer two days later and after a flashy intro attempts to boil his enemy alive. The mascots dress up as lobsters for the occasion and scare Launchpad when he comes to help. The Liquidator escapes up a pipe and Darkwing instructs Launchpad to follow, for which the mascots lastly dress up as pipes. Dry Hard

Liquidator gets out of jail on good behavior and returns to the drink business. The two mascots provide the jingle for the commercial of his brand-new drink: Thirst-Buster. They are also present when the Liquidator poisons his own drink to turn everyone in St. Canard into water and sing the Thirst-Buster jingle when Darkwing Duck comes to investigate. Liquid Diet

Retrieved from "https://darkwingduck.fandom.com/wiki/Liquidator%27s_mascots?oldid=20823"
Community content is available under CC-BY-SA unless otherwise noted.