The Liquidator is one of the most dangerous mutants in St. Canard. Not only does he possess the power of hydrokinesis, his body consists of nothing but water and the hydrokinesis applies to that too. He can change shape at will and whether objects go right through him or if he is effectively solid is up to him. Before the event that granted him this power, he was Bud Flood, the owner and spokesperson of a bottled water company. Already anything but a saint, he contaminated the water of the competition with various experimental concoctions. It's one of these concoctions mixed with water that transformed him into the Liquidator; a change he whole-heartedly embraced. His first course of action was to use his new abilities to make the whole of St. Canard dependent on his company and, though the businessman within him has never ceased to be, later he went for more direct forms of crime and even joined the Fearsome Five.

Bud Flood was a crooked businessman who owned the Sparkling Crystal Pure Flood Water, a bottled water company based in St. Canard. During a heatwave in St. Canard, Flood contaminated the water of competing drinks, leaving only his own brand, Sparkling Crystal Pure Flood Water, and Coo-Coo Fizzy Water. He was assisted by two women early on, as well. He acquired his powers trying to poison his competitors’ supply of water in an effort to monopolize the market during the heat wave. When Flood was caught in the act by Darkwing Duck he took a tumble into one of the tainted vats and seemed to melt away and die. The volatile chemicals Flood had used instead altered his molecular structure, transforming him into a being made entirely of living water. Now rather deranged, the Liquidator blamed Darkwing for throwing him into the vat. Darkwing told him that he tried to save him, but he thought he died. Since he could now control all liquids, he turned all the water in St. Canard into a rubbery substance, and now had an absolute stranglehold on the water business in the city. Darkwing was able to defeat the Liquidator by pouring powdered cement on him, restoring the city's water to normal. 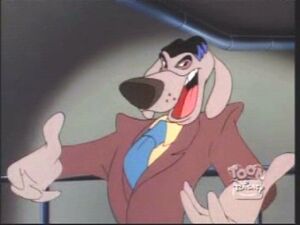 Because he was once a businessman, much of the Liquidator's dialogue is based on advertising slogans. He formed part of the Fearsome Five.

Not only is his body completely made out of water, he also possesses numerous water-related abilities in "Dry Hard," including reforming when evaporated and when frozen, commanding constructs made of his watery body and to create water monsters of limited intelligence not connected to him. In "Dry Hard" he also shows the ability to rapidly heat or chill water. In "Just Us Justice Ducks" he also shows the ability to engulf an opponent, Neptunia; who much to his chagrin, turns the tables on him by whipping him up with her trident from within.

The Liquidator is one of the most efficient mutants in existence as his powers are plentiful and the drawbacks limited. What little negative consequences he receives from his new form start with his appearance. Liquidator is one of those mutants who has undergone a visual change that makes it impossible for him to blend in. Despite having full control of water, he is weak against sponges and can easily be caught with one."Dry Hard""Darkwing Doubloon" The Kitty Kat Kaper Carelessness with his own form's access to small places also has occasionally caused him to become locked up in simple containers. "Jail Bird" But the big one is his weakness against any substance that reacts with water to form a solid structure. Get cement "Dry Hard" or pudding powder "Just Us Justice Ducks, Part 2" on him and it's a matter of waiting. He'll eventually get out, presumably as vapor, but for a good while he'll be immobilized.

Before he became a water dog, he had black hair, light brown fur, a brown shirt with a blue necktie, a yellow shirt underneath, had pants and worn shoes. As a water dog mutant, his entire body became blue and watery, has dark blue eyes (he had black before his mutation) and a blue tongue (it was pink before his transformation). He also has a slightly garbled voice and also almost only speaks in slogans except with a few exceptions when he screams.

"Dry Hard" "Just Us Justice Ducks, Part 1" "Just Us Justice Ducks, Part 2" Liquidator is among the villains Darkwing dreams up during a period of low crime. In the dream, he is defeated by a giant Morgana Macawber. "Ghoul of My Dreams" "Life, the Negaverse and Everything" "Darkwing Doubloon" The Liquidator robs a bank during the time Darkwing is a wreck due to Gosalyn's disappearance. Needless to say, it's a breeze, but then he regrets it when Darkwing comes to his senses and drastically improves his strategies to make St. Canard crime-free. Though because Gosalyn went back in time to undo her disappearance, this never happened. "Time and Punishment" "Jail Bird"

"Liquid Diet" Liquidator puts money together with Moliarty, Tuskerninni, Steelbeak, Bushroot, Megavolt, and Quackerjack to watch the Miss Corn Fritters Pageant on pay-per-view. Their session is temporarily disrupted by Darkwing Duck, who suspects that they are involved in the abduction of Fluffy. However, Darkwing also meant to watch the pageant and readily agrees to pay ten bucks to get to watch along. Some hours later, the pageant finishes and everyone gets back to business, which for the villains means attacking Darkwing Duck. Liquidator, however, is quickly taken out by Darkwing with a sponge that absorbs him. The crimefighter then uses him against his colleagues by throwing the sponge in Tuskerninni's path, which makes him slip and trip into most of the others, knocking them out cold. The one remaining, Megavolt, gets the wet sponge in his neck and short-circuits. Darkwing calls the cops on them and they are all hauled off to jail, even though they had nothing to do with Fluffy's disappearance. "The Kitty Kat Kaper" "Fluffy's Reign of Terror!"

Liquidator has made his headquarters deep in the sewers, where he is well-protected by the F.O.W.L. forces under his command. Darkwing Duck reaches him still, leading to a fight between the two. Liquidator remains in the water for most of it as Darkwing can't harm him in there. He only occasionally comes out to launch an attack of his own. Forming a horn of water, he either sends water shaped like fish directly at Darkwing or raises bubbles which take the shape of birds as they target Darkwing. He is vulnerable during these attacks and its these openings that Darkwing uses to defeat him. "Darkwing Duck"/"Darkwing Duck"

Liquidator and a bottle of water.

Liquidator and his yellow water.

A second pic of Liquidator and his yellow water. 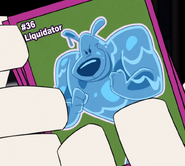