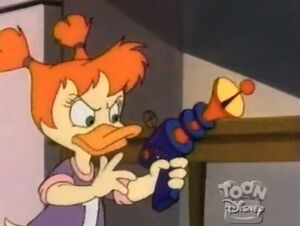 Lilliput's size gun is a weapon created by Lilliput. It consists of a ray that can shrink or enlarge objects and living creatures, but Lilliput uses it mostly to make things smaller.

The size gun is one of two inventions the vertically challenged Lilliput made, the other being the ant helmet. It is capable of altering the size of whatever is caught in its beam. It can also undo its own effect. It is unknown what the range limits are, if there are any. It is also unknown what happened to the gun after Lilliput was arrested. "Getting Antsy"

Lilliput uses the gun to downsize any building he likes in St. Canard to add to the decor of Goony Golf, his miniature golf course. He plans to eventually bring the entire city under his command, but for now he is satisfied with the extra customers the "lifelike models" attract and the money he can take from the shrunken buildings to return to its original size when it's convenient to him. He is assisted in his scheme by ants, with which he communicates through a helmet he also invented. One night, he steals a Hamburger Hippo restaurant and it is this theft that clues in Darkwing Duck that a new villain is afoot. Because Lilliput leaves no evidence, Darkwing loses the trail and only refinds it by accident. He and his family visit Goony Golf and Drake recognizes the Hamburger Hippo model as the earlier stolen building due to the presence of Launchpad's scarf. The moment he dons his hero outfit, Lilliput sees him and shrinks him to ant size. Through trial and error, Darkwing makes it to the admission house when Lilliput is collecting his money. The villain notices the hero immediately and threatens to shrink him even further, but opts to just smash him with the gun's handle. Darkwing escapes and reunites with his team. The four of them confront Lilliput, who threatens to shrink them too. Gosalyn knocks the size gun out of his hands. When Lilliput regains it, he quickly uses it on Darkwing to turn him germ-sized. The others are horrified and about to share his fate when Lilliput suddenly becomes ill. Honker realizes this to be germ-sized Darkwing's doing, so Gosalyn takes the gun and uses the enlargening mode when Lilliput sneezes. Her dad becomes his old self again, tand is accompanied by two real germs he befriended and now are people-sized too. Lilliput tries to gain the upper hand one last time by retrieving his gun from Gosalyn, but Darkwing easily takes it from him. "Getting Antsy" 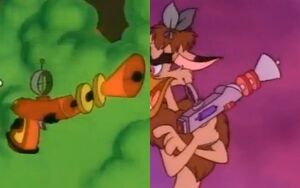 Retrieved from "https://darkwingduck.fandom.com/wiki/Lilliput%27s_size_gun?oldid=23423"
Community content is available under CC-BY-SA unless otherwise noted.