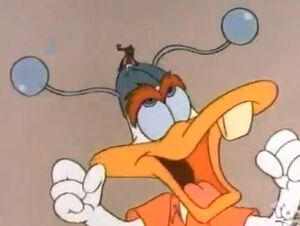 Lilliput's ant helmet is a gadget created by Lilliput. It grants its wearer the ability to communicate with ants without blocking communication with other people.

The ant helmet is one of two inventions the vertically challenged Lilliput made, the other being the size gun. Anyone who puts it on their head automatically understands ant speech and has their messge translated to ant speech for the insects to understand. How useful this is depends on the wearer's ability to befriend the ants, which for Lilliput is no problem. The ability to talk to ants occurs concurrently with regular people communication. Getting Antsy In one timeline, Lilliput got his helmet back after being arrested. Time and Punishment In another, Darkwing confiscated it and added it to his memorabilia collection. A Midsummer Gnat's Spree Lilliput has since been trying to recreate it using tinfoil since. Orange Is the New Purple, part 2

Lilliput uses the helmet to befriend the ants living at Goony Golf, his miniature golf course. In return for food and other luxurities, and because he's gentle to them, they help him with his scheme to steal all kinds of buildings in St. Canard. Lilliput's other tool is a gun that can alter the size of its targets, which he uses to make the buildings small enough for his ants to carry and collect. He plans to eventually bring the entire city under his command, but for now he is satisfied with the extra customers the "lifelike models" at Goony Golf attract and the money he can take from the shrunken buildings to return to its original size when it's convenient to him. One night, they steal a Hamburger Hippo restaurant and it is this theft that clues in Darkwing Duck that a new villain is afoot. Because Lilliput leaves no evidence, Darkwing loses the trail and only refinds it by accident. He and his family visit Goony Golf and Drake recognizes the Hamburger Hippo model as the earlier stolen building due to the presence of Launchpad's scarf. The moment he dons his hero outfit, Lilliput sees him and shrinks him to ant size. Rather than deal with him personally, he sics his ants on him, but through luck and skill Darkwing avoids death-by-bug. Through trial and error, Darkwing reunites with his team. The four of them confront Lilliput, who calls his ants to arms when his gun is knocked out of his hands. Darkwing tries to destroy the helmet, but fails. Improvising, Gosalyn and Honker grab cans of cola present in the admission house and flush the ants out. This deeply upsets Lilliput, but his revenge is thwarted by his defeat. Getting Antsy Lilliput wears his ant helmet but is defeated before it can be of use to him. Time and Punishment

Illusion-Lilliput wears his ant helmet but doesn't do anything with it. Campaign Carnage, Part 3

Illusion-Lilliput wears his ant helmet but doesn't do anything with it. Campaign Carnage, Part 3 The real Lilliput has to do with his trusty helmet because Darkwing Duck now has it as part of his villain memorabilia collection inside Darkwing Tower. A Midsummer Gnat's Spree During his stay in the St. Canard Maximum Security Prison for the Criminally Crafty, Lilliput recreates the helmet from tinfoil, Orange Is the New Purple, part 1 which is his undoing when Gosalyn rips it down over his eyes to incapacitate him. Orange Is the New Purple, part 2

Retrieved from "https://darkwingduck.fandom.com/wiki/Lilliput%27s_ant_helmet?oldid=21351"
Community content is available under CC-BY-SA unless otherwise noted.