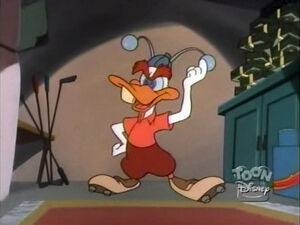 Lilliput Gooney is the owner of Goony Golf, a miniature golf course, and an inventor in his spare time. Among his creations are a helmet to communicate with ants and a ray gun that can shrink and enlarge its target. The helmet he used to befriend the ants at Goony Golf and become their leader. With his tiny minions and the size gun, he began turning St. Canard's monuments into miniature props for his golf course. This is essentially his modus operandi, as well as collecting some cash along the way. He is defeated when he shrinks Darkwing down to the size of the germ, and the caped crusader "infects" him.

Despite having a scheme that involves small creatures cooperating to turn everyone else even smaller, Lilliput doesn't seem to have any negative feelings about his size. In fact, he is a confident and proactive man who cares for his ants the best he can.

One night after creating the ant helmet and the size gun, Lilliput takes his ants to steal many buildings in St. Canard to add them to the landscape of Goony Golf and collect the valuables inside at his leisure. One of those buildings he shrinks for his ants to collect is a Hamburger Hippo joint. Coincidentally, Darkwing Duck and Launchpad just had dinner there and Launchpad forgot his scarf. When they return, they discover the place missing and make it their case. Lilliput's ants theft of Launchpad's hamburger nearly puts them on the villain's trail, for which he berates his minions when they return. Still, he lets them keep the hamburger as long as they double their work speed. He continues to collect many more buildings that evening before returning to Goony Golf and setting up his acquisitions. The next day is half legal work, half remaining criminal activities, which includes retrieving money from the buildings and enlargening it to its former size. Coincidentally, Darkwing shows up and realizes the new miniature buildings are the stolen ones. Lilliput shrinks him and sics his ants on him while he continues his architecture duties. "Getting Antsy" Lilliput is one of the villains terrorized out of St. Canard when Darkwing, out of grief, drastically improves his strategies to make the city crime-free. Though because Gosalyn went back in time to undo her disappearance, this never happened. "Time and Punishment"

Suff-Rage selects Lilliput for her League of Barely-Remembered Supervillains, an illusion for Darkwing Duck and Launchpad McQuack to fight and either be defeated or distracted by. The illusion of Lilliput wields his trademark size gun against Darkwing during a one-on-one round. As with the others, Lilliput is defeated when the group is caught in a curtain. Just as Darkwing gloats, Suff-Rage reveals they were only an illusion. "Campaign Carnage, Part 3"

"Campaign Carnage, Part 3" Lilliput becomes incarcerated in the new maximum security jail in St. Canard. Along with all other inmates, he is freed from his cell by Negaduck to hunt down a locked-in Darkwing. "Orange Is the New Purple, Part 1"