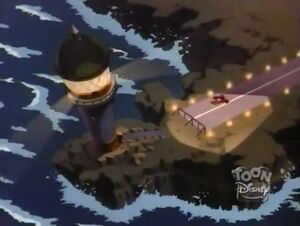 The Lighthouse at Beaker's Point is the primary hideout of Megavolt, being more removed from society than the one in the bad part of town. It is suitably outfitted for a villain's lair, but is not overstuffed like Megavolt's other place.

The Lighthouse at Beaker's Point Duck Blind is one of several lighthouses in the bay city of St. Canard. It stands alone, but is located at only several meters from the rest of the city. Comic Book Capers Notably, it is one of the two hideouts of Megavolt. Comapred to the other one, an apartment in the bad part of town, the lighthouse is far more of a home and far less of a workshop. Duck Blind

Darkwing finds out about Megavolt's lighthouse hideout because Megavolt is big on using electricity. One hack into the computer of the Department of Water and Power to find the locations of any power surges later and he's at the criminal's doorstep. Involuntarily, that is, because an earlier round with the mutant has left him blind. Launchpad, Gosalyn, and Honker believe he still has what it takes to be a superhero and arrange to investigate the lighthouse first to ensure it really is Megavolt's hideout. The "Darkwing Duck Fan Club", as Megavolt identifies them, is promptly captured, leaving Darkwing no choice but to go in himself. Megavolt makes the mistake of underestimating the physically challenged crimefighter and is duly disposed of. To top it off, in trying to navigate the room for a way to free his team, Darkwing accidentally shocks himself on Megavolt's furniture, which miraculously restores his sight. Duck Blind Megavolt is having a romantic moment with a lightbulb when he is rudely interrupted by several sheets of paper floating in through the window. Upon reading one, he finds out it is the script-in-progress for a comic book about Darkwing Duck with him as the villain. Megavolt is no little displeased and adds the necessary twists to guide his fictional self to victory. Before he can write the ending, Darkwing has followed the paper trail to the lighthouse, has entered the building, and takes back the script from his adversary. An argument breaks out about the new content and Darkwing takes Megavolt's typewriter to pen his own fictional self as the victor on the spot. Comic Book Capers Megavolt has murdered Darkwing and is now a star. Darkwing's ghost pays him a visit in his lighthouse for revenge, but firstly finds he has become intangible and invisible and can hurt nor show himself to the villain. Secondly, his attention is diverted when the Grim Reaper shows up and Darkwing has to flee to avoid being dragged off. Gosalyn and launchpad try to get back at Megavolt on their own terms, only to be snatched up to become his next murder victims. Darkwing tricks the Grim Reaper into letting him return to the lighthouse for one hour to save them. He still can't interact with anything, but he can instruct Launchpad on how to be a hero. Launchpad performs well enough and Megavolt is beaten. Then it turns out to be all a dream. Dead Duck Megavolt is awakened from his sleep when Darkwing smacks against the lighthouse while trying to save a sleepwalking Gosalyn. Whirled History Upon receiving an invitation for his high school reunion, Megavolt anxiously paces around the living room pondering what to wear. A lightbulb proposes he'll just go in his villain costume, which he thinks is a great idea. Clash Reunion

Retrieved from "https://darkwingduck.fandom.com/wiki/Lighthouse_at_Beaker%27s_Point?oldid=21638"
Community content is available under CC-BY-SA unless otherwise noted.