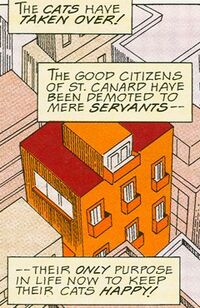 Hotel Le Posh is the most luxurious hotel in all of St. Canard. During his reign over the city, it served as Fluffy's headquarters.

Le Posh is at the top of the most magnificent and grand hotels in all of St. Canard. This is why Fluffy confiscated its best room as his home when he became king of the city.

After his victory over Darkwing Duck, Fluffy moves his headquarters from the King of the Sea canning factory to Le Posh. While observing the city from the best room, he realizes he's not yet satisfied and gains the idea to improve the I.Q. of his second-in-command, Al, too. He creates a potion for this purpose, but Al refuses to drink it. Fluffy chases him around the hotel room, but he escapes and Darkwing and Launchpad make their entrance. They manage to take Fluffy's super-suit's gloves from him and he opts to flee. However, his rocket pack malfunctions just as he leaps off the balcony and Darkwing can only just grab his cape to save him, after which he arrests the criminal and the hotel goes back to normal. Cat in a Hot Tin Suit 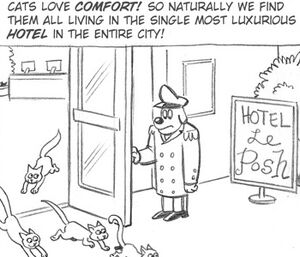 Retrieved from "https://darkwingduck.fandom.com/wiki/Le_Posh?oldid=17475"
Community content is available under CC-BY-SA unless otherwise noted.