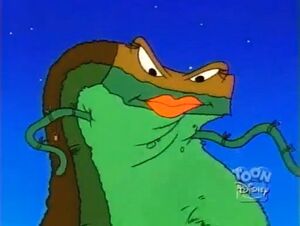 Lawn is the final product of the IQ2U formula created by Bushroot, being a collective of grass outside his greenhouse given sapience. This, however, does not make her loyal or even socially positive to Bushroot. Lawn has her own designs and goes her own way and she will use force if she has to.

It is unknown who her voice actor is.

After the IQ2U formula was first used to give life to a hedge, creating Hedgy, and then to change Gosalyn Mallard into Yucky Duck, Bushroot perfected his formula, possibly reverse engineering it from Yucky. This means that, unlike the other two, Lawn is stable and won't lose her intelligence or dissolve into a puddle of goo. She also doesn't seeem to be composed of slime like her predecessors, which could be due to the changes in the formula or due to the other two getting the concoction on them instead of absorbing it through the roots like Lawn did.

Lawn is a bit of a diva, dramatic in her actions and speech and focussed on her own wishes first and foremost. If she doesn't get what she wants, she becomes hostile.

Lawn is a field of grass of undetermined size. Her form manifests as a 180°-curled strip of grass and soil containing the roots, with her face at the end of the strip and two mutated tentacles of grass as arms.

In an attempt to create intelligent plants to keep him company, Bushroot creates and perfects the IQ2U formula. Spike, jealous, steals the test tube containing the concoction and buries it in the yard outside Bushroot's greenhouse. Moments later, Lawn comes into existence. She ignores Bushroot and instead puts the moves on Darkwing Duck, who is not flattered. Darkwing and Bushroot join forces to get past her and get a flock of sheep over that proceeds to eat her alive. Slime Okay, You're Okay

Retrieved from "https://darkwingduck.fandom.com/wiki/Lawn?oldid=23402"
Community content is available under CC-BY-SA unless otherwise noted.