Launchpad McQuack is Darkwing Duck's trusted sidekick and personal pilot. Launchpad was Darkwing's biggest fan and begged Darkwing to be his sidekick several times before Darkwing until eventually he accepted him. He refers to Darkwing as "DW" and Darkwing often calls him "LP". He originally referred to Scrooge McDuck as "Mr. McD". Launchpad is very simple-minded, laid-back, very loyal, modest and hard-working. Launchpad is the designer and builder of the Thunderquack, Darkwing's airplane. Even though Launchpad is a skillful pilot, he is known for his crash landings.

He was voiced by Terence McGovern.

Launchpad grew up as the oldest child in a family of stunt pilots. His parents are Ripcord and Birdie and he has a younger sister named Loopy. "DuckTales" As a child, Launchpad was afraid of flying, so his father forced him into the passenger seat of his plane to get him over it. During such a flight, Launchpad fell out and was saved by Tia, an alien princess. They flew together for a while and even crashed together, with Tia learning to have fun thanks to Launchpad. Tia was taken back by her people shortly after and Launchpad was returned to the passenger seat. From that day on, he was no longer afraid of flying. "U.F. Foe"

At around 20, Launchpad tried to join his parents' business as the Flying McQuacks, but he couldn't keep up with their level of flying and left in shame. Some months later, he owned his own hangar and had built himself a plane, which he proudly named the Sunchaser. Because of his low charge of ten cents a mile, he drew the attention of Scrooge McDuck, who wanted him and his plane for an expedition. Launchpad made a terrible first impression, but by lowering his rates Scrooge still agreed to hire him. The expedition gave Launchpad his first crash but also plenty of opportunity to prove himself and Scrooge made him his regular pilot while the Sunchaser was donated to the museum. Launchpad would stay with Scrooge for some ten years, piloting the Joyrider and restoring the relation with his family, "DuckTales" after which he became the sidekick of Darkwing Duck, building and piloting the Thunderquack. "Darkly Dawns the Duck" Sometime in these years, he acquired, possibly by building it himself, a small orange helicopter. "Darkwing Duck"/"Darkwing Duck"

In the series, Launchpad is depicted as living with Drake Mallard. There is no explanation of how Drake accounts for Launchpad's presence in his household to his neighbors the Muddlefoots. Launchpad doesn't disguise his identity when he is out with Darkwing Duck fighting crime. He also, like Drake, doesn't appear to have any sort of job beyond his crime fighting duties. Launchpad also collects buttons. "A Revolution in Home Appliances"

Launchpad McQuack is usually depicted as brave, good-hearted, and incredibly dim-witted. While a skillful pilot, he is very bad at landing and almost always crashes instead but, to his credit, he and his passengers always survive such crashes, and he takes a strange sort of pride in being able to crash any imaginable aircraft. Launchpad leaves his job working for Scrooge McDuck in the series pilot, "Darkly Dawns the Duck".

In the reboot, he is now voiced by Beck Bennett.

Meeting Darkwing in his hangar, Launchpad claims to be the underappreciated superhero's biggest fan. Launchpad offers to be Darkwing's sidekick several times before the hero eventually accepts him. Launchpad is the designer and builder of the Thunderquack, Darkwing's custom air transport."Darkly Dawns the Duck" "Water Way to Go" "In Like Blunt" "Dirty Money" "A Duck by Any Other Name" "That Sinking Feeling" "Getting Antsy" "Battle of the Brainteasers" "Fungus Amongus" "Can't Bayou Love" "You Sweat Your Life" "Trading Faces" "Hush, Hush Sweet Charlatan" "Apes of Wrath" 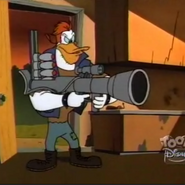 Negaverse Launchpad, who is a psychopath.

LP & DW at the Disney parks!

Launchpad attempts to help decorate the tree, but gets stuck.