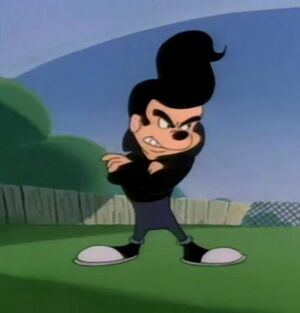 Lamont is the younger brother of the King and a classmate of Drake Mallard during the 1960s. Introduced to music and crime by his big brother before he even hit his teenage years, Lamont goes where he goes. The two share a mutually supportive relation, which is added to by Lamont's deep admiration for the King. Within the gang they're both part of, Lamont is the drummer and despite his young age as ready to resort to violence as the other members. He is generally competent in following instructions and looks out for ways to improve the group's functioning on his own initiative.

He is voiced by Candi Milo. 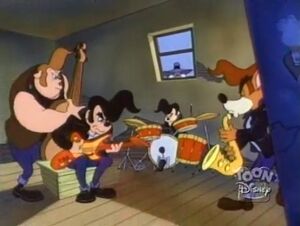 Lamont's mother adviced her oldest song against becoming a musician, which he ignored and therefore Lamont ignored too. Whereas the King became a guitarist, Lamont became a drummer. The two siblings, along with Boxcar and another guy, formed what is either a criminal band or a musical gang. Despite being the youngest by several years, Lamont is taken seriously by the group and given equal responsibility.

For one reason or another, Lamont set his sights on Drakey Mallard and forced him to semi-officially participate in the gang's crimes several times. Knowing him to be a coward, Lamont nor the others thought this could possibly backfire. In the end, this miscalculation ended them up in jail young and what became of them after that is unknown.

Whereas the King has an idol in Elvis Presley, Lamont has an idol in his big brother. This doesn't mean that he tries to be him, but that he takes after his preferences and that he wants to get his approval. Fortunately, the King is fond of his little brother and nothing less than supportive of him. Lamont is fine having his brother as his leader, as he still gets to enjoy the time they get to spend together and the money they abstract.

Lamont is a miniature version of his big brother. He is a dog who has his black hair done in a high ducktail, which is the signature hairstyle of the gang. He chooses his outfits based on the fashion choices of the King, which in turn match those of Elvis Presley relative to age.

Lamont and Drakey are hanging around in the school yard when Lamont decides it's time he makes his way to the store the gang arranged to rob. He forces Drakey along with noogies and finds that Boxcar and the other guy are already present, but not yet the King. He arrives soon after and forces the store clerk to reveal the location of the safe. Cecile takes care of opening it, but as they gather the money, Darkwing Duck and Gosalyn, who've travelled from the future with the time machine, enter. Darkwing jumps in to stop them before being pulled away by his consequence-conscious daughter. Confused, but undaunted, the gang escapes with the cash and from that day on it's smooth sailing for them. At around 30 years later, the gang has taken control of St. Canard and extract taxes from the population. One day, they visits the garage owned by J. Gander Hooter and Sara Bellum to demand the taxes for that day. When the duo refuses to pay, Lamont and his colleagues shake them for loose change. However, this is not the course of events as they should've happened but an alteration of the timeline that happened because of Darkwing's interference. Coincidentally, this moment lines up with the moment from which Darkwing and Gosalyn left on their time journey in the first place and upon returning Darkwing tries to stop the crooks. The King incapacitates him and the gang readies to murder Darkwing under accompaniment of a little music, but Gosalyn manages to save him. Realizing they are no match for the gang now, the two return to the past to set things straight. The gang escapes him at the music store still, but they find Darkwing spying on them during band practice in their hideout a short while later, having been led their by Drakey. The gang prepares to beat him and the two children to pulp, but they escape. The gang does some spying back and learn that Darkwing is training Drakey to stand up for himself. Lamont is sent to the scene to pretend to be afraid of Drakey post-training and not-so-accidentally spill that the gang will rob Royal Records that evening. It goes with flying colors and the gang retreats to prepare for their robbery and murder scheme. That evening, as per the plan, the three heroes arrive to stop the gang and get ambushed. Drakey escapes, but Darkwing and Gosalyn are set for execution by being squached by a giant LP record. Against everyone's expectations, Drakey saves them, which the gang is alerted to by the lack of music. As the King goes after Drakey, Lamont and the others are kept occupied by Darkwing and Gosalyn. The fight ends in the heroes' favor and the gang is subsequently sent off to jail. "Paraducks"