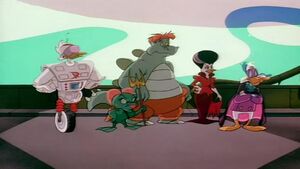 The Justice Ducks are a five-membered ragtag team of superheroes who protect St. Canard and its surroundings whenever their joint forces are required. The team was created on a whim when purely coincidentally all its members were at the same place at a crucial moment during the rise of the Fearsome Five. Despite some cooperation problems at first, almost all of which caused by eventual team leader Darkwing Duck, the Justice Ducks have proven themselves effective when it matters.

The (core) team consists of:

Unlike most other groups and organizations, the formation of the Justice Ducks is a result of a series of coincidences rather than conscious building. Its two starter points are Darkwing Duck and Gizmoduck, who independently became the superheroes guarding over respectively St. Canard Darkly Dawns the Duck and Duckburg. DuckTales However, the bright and conventionally heroic Gizmoduck always was more positively received than the shadowy and cynical Darkwing, leading Gizmoduck to be employed for missions in St. Canard too. This way, he and Darkwing met. At first Gizmoduck mistook Darkwing for a villain, but one team-up to take the true enemy, Steelbeak, down later they became the closest thing to friends they can be without letting go of their territorial and spotlight-craving natures. Tiff of the Titans Prior to that, Darkwing met the three whose superhero career would start with the formation of the Justice Ducks. Darkwing met Morgana Macawber when she was still using her resources for crime for easy monetary gain, Fungus Amongus but the mutual attraction between them as well, Morgana's refusal to actually harm anyone, and two necessary team-ups made her abandon the villainous path. Ghoul of My Dreams Neptunia became an acquaintance of Darkwing when she, too, was an enemy of his, albeit a hero from her own perspective. Her goal was to save the aquatic life at the cost of land-based life that was endangering the former. With Launchpad's and Gosalyn's aid, the two came to see eye-to-eye and compromised. Something Fishy Lastly, Stegmutt ended up on the crimefighter's path when he was still the assistant of Dr. Fossil, who wished to destroy modern society to make room for dinosaurs. However, he did not mean anyone harm, but was simply too dimwitted to understand Fossil's goals. Gosalyn and Honker made him realize the consequences and he helped stop his former boss's plans. Jurassic Jumble

When the Fearsome Five came into existence and started causing trouble in St. Canard, the army and Gizmoduck were sent to St. Canard. Darkwing, in the company Launchpad, met them at Audubon Bay Bridge and tried to get them to leave so he could keep the glory for himself. However, Stegmutt spotted him and followed him to the bridge as he still owed him change. As well, Gosalyn and Morgana joined Darkwing to deal with some of the relationship trouble the adults were having. Gizmoduck assumed all of them to be there to help out against the Fearsome Five and Darkwing tried desperately to get rid of all of them when the villains unexpectedly showed up and destroyed the bridge, dumping some of the army in Audubon Bay and cutting off access to the city for the rest of them. Once they left, Neptunia showed up to help the soldiers back on shore, prompting Gizmoduck to ask again if those present were planning to help, acknowledging that no one on their own could deal with the Fearsome Five under the current circumstances. Gosalyn immediately announced that they should form a superhero team and name themselves "Justice Ducks". Her following enthusiastic sales pitch easily convinced even Neptunia, who otherwise did not like being called a duck. All would've been arranged then if not for Darkwing's demand that every single one of them, his own sidekick and daughter included, remove themselves and leave the Fearsome Five to him. They did. Darkwing managed to get himself nearly killed by the villains shortly after. Just Us Justice Ducks, Part 1 Meanwhile, Launchpad and Gosalyn allowed the other four heroes to recollect in Darkwing Tower. Each left with their own mission after that and each ended up facing a member of the Fearsome Five and get defeated and captured. Archie, Morgana's pet spider, escaped to tell Gosalyn and Launchpad. Archie arrived at Darkwing Tower roughly when Darkwing did. By this point, Darkwing acknowledged he needed allies and went out to rescue the others. With a lot of luck and some aid from Morgana, the Justice Ducks broke free, circumstantially accepted Darkwing as the team leader, and proceeded to trash the Fearsome Five. Afterwards, they returned to Darkwing Tower to acknowledge their joint accomplishment.

Though nothing was ever explicitly agreed to, it can be assumed the alliance of the Justice Ducks is still in place. As a team, the alliance is centered around Darkwing Duck, who was the first to know all the other then-future members. Every single member of the team has experience being on the wrong side of the law or being mistaken for a criminal, and Darkwing has been involved in most of these histories and therefore knows what they're worth. He also has so far been the only one to share his resources with the others, even if technicallly he only gave his permission after the fact. A simplified model has Darkwing provide gadgets, Gizmoduck add mobility, Morgana bring in magic, Neptunia arrange aquatic support, and Stegmutt deal strength. But while, for instance, Stegmutt is the team muscle, Gizmoduck's and Neptunia's physical powers are not to be underestimated either, and Morgana's teleportation and transformation magic, though wonky, can keep up with Gizmoduck's speed and flight.

Of the team, Darkwing, Morgana, and Neptunia have personal helpers, who ended up providing aid to the Justice Ducks through these individual connections. The most prominent of these are Launchpad and Gosalyn on Darkwing's side, but there's also Morgana's assistants Archie, Eek and Squeak as well as Neptunia's pal Hal. Just Us Justice Ducks, Part 2 Whether these six count as members of the team is not entirely clear, but at least in one alternative history, Launchpad and Gosalyn replace Morgana and Neptunia. Darkwing Doubloon

Retrieved from "https://darkwingduck.fandom.com/wiki/Justice_Ducks_(team)?oldid=24613"
Community content is available under CC-BY-SA unless otherwise noted.