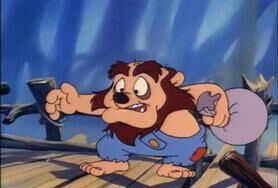 Jambalaya Jake lived in the bayou along with his pet alligator Gumbo, but the two decide to move to the big city after hearing it was easy pickings. The two make their hideout in the sewers of St. Canard, where they plot their crimes. They also occasionally hide in the reptile house at the St. Canard Zoo.

He was voiced by Michael Gough.

By using Launchpad McQuack as bait, Jake and Gumbo catch Darkwing Duck. But Darkwing shows them first hand that in the city it is not so "easy pickings." "Can't Bayou Love" Jambalaya Jake and Gumbo reappear in an attempt to get even with Darkwing. Jake is also helped by Granny Whammy, an old witch who makes potions for him to use in exchange for money. In the end, the two are arrested for trying to frame Darkwing Duck for their crimes. "Double Darkwings"

Suff-Rage selects Jambalaya Jake for her League of Barely-Remembered Supervillains, an illusion for Darkwing Duck and Launchpad McQuack to fight and either be defeated or distracted by. The illusion of Jake is accompanied by one of Gumbo, but takes on Darkwing alone with a club. As with the others, Jake is defeated when the group is caught in a curtain. Just as Darkwing gloats, Suff-Rage reveals they were only an illusion. "Campaign Carnage, Part 3"

This article is a stub.
Please help Darkwing Duck Wiki by expanding it, adding pictures, and improving existing text.
Retrieved from "https://darkwingduck.fandom.com/wiki/Jambalaya_Jake?oldid=28370"
Community content is available under CC-BY-SA unless otherwise noted.