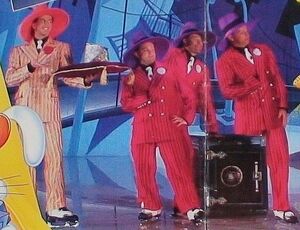 Ice-Head Harry is a mob boss in St. Canard. He is the leader of a criminal unit that goes by the name the Hoods and busies himself with any heist that seems profitable. He does not at all respond proportionately to rejection and refusing him whatever he has set his mind on comes with harsh consequences.

He is portrayed by Andrei Torossian.

Ice-Head Harry is one of the many gang leaders active in St. Canard with at least three minions under his command that are collectively known as the Hoods. Although his name makes one suspect he has either some cold-related power or cold-related villain theme, this does not appear the case. Ice-Head Harry's aim is mostly monetary gain, but he's got a self-interested "romantic" side he's ready to break the law for too. Daisy Duck learned that the hard way.

With a reputation as the most cold-blooded villain in St. Canard, Ice-Head Harry is not a fun fellow to find on one's path. He is out only for himself and arrogant enough to believe that he is so great that others will voluntarily comply to his wishes. If he doesn't get his way, he becomes very dangerous.

Ice-Head Harry goes dressed in a gold and white striped suit with a white tie, a red wide-brimmed hat, and a red rose as boutonnière.

Ice-Head Harry sets his sights on the Dazzles, a member of the singing and dancing troupe the Dazzlettes, and determines she will reciprocate his feelings. To win her over, he sends the Hoods to steal the Diamond of Love from the Acme Jewelry Company so he can gift it to Dazzles, convinced it will do the trick. The heist is a success and Harry proudly presents the magnificent diamond to Dazzles. She, however, is not interested, as she has feelings of her own for someone else. She knows that Ice-Head Harry knows this and confronts him with that fact as she rejects the diamond. This infuriates Ice-Head Harry and he orders the Hoods to tie Dazzles to a keg of dynamite. He personally lights the fuse. In the heat of the moment, the mobster forgets about Dazzles's colleagues, who have seen everything and run off to get help, which they find in the form of Darkwing Duck, Launchpad McQuack, and the police. Dazzles gets saved and the Diamond of Love recovered, after which Ice-Head Harry and the Hoods are sent off to jail. Walt Disney's World on Ice: Double Feature... Live!

Retrieved from "https://darkwingduck.fandom.com/wiki/Ice-Head_Harry?oldid=20630"
Community content is available under CC-BY-SA unless otherwise noted.