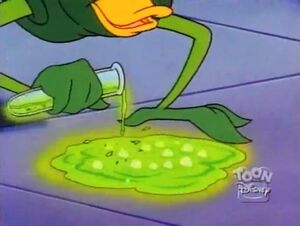 IQ2U is a concoction created by Bushroot as part of his ongoing attempt to make himself a social circle of sapient plants. It's a gooey substance with the potential to mutate plant and person into the same result: a walking, talking, plant-based lifeform, but most versions of the formula cause an unstable mutation that ends in death.

IQ2U is a green goo which only specified ingredients are a certain flower's nectar and plutonium plant plasma, the most powerful growth hormone in the world. The first batch Bushroot brewed was intended to be used to bring plants to life, which it did. By pouring the viscous liquid on a hedge, he created Hedgy, who was not nearly as intelligent as Bushroot hoped for. He also was covered in an inactive variant of IQ2U and had an insatiable appetite. Bushroot took care of him as well as he could, but the mutation was unstable and Hedgy dissolved alive into a puddle of inactive goo.

An unexpected alternative purpose to IQ2U 1.0 was that it could also turn non-plant bodies into blobs of plant material, or more scientifically, a "photosynthetic primordial atomic structure". This happened to Gosalyn Mallard by accident, who was called Yucky Duck during this time. As with Hedgy, the slime she came to consist of was inactive and could not mutate others. She also gained a comparable appetite, but after a while the mutation began to affect her intelligence and the next step would've been her death had she not been cured with water and soap in time. One ability Yucky displayed that would logically have been unique to her fully goo-based body was that she could survive being split up in smaller units. And while she may or may not have had the ability to split up at will, she could recombine at will.

While researching a cure for Gosalyn, Darkwing reverse engineered the formula from slime he sampled from her and created an active goo. He tested this on several plants, which went through a combination of Hedgy's and Gosalyn's stages: sapience, hunger, zombification, and death. At the same time, Bushroot created IQ2U 2.0, seemingly also by reverse engineering from Gosalyn's slime. The latest brew was to not have the negative effects of the earlier formula, and if its one creation, Lawn, is anything to go by, it didn't. Lawn didn't get it on her like the other two but absorbed it through her roots and though her life was short, she was more coherent than Hedgy upon his creation and did not show signs of hunger. However, this also made her not dependent on Bushroot like the other two, which necessitated him and Darkwing to kill her. Bushroot did not experiment further with the formula after that.

Bushroot breaks into the botanical research lab on Fliegel Street to obtain plutonium plant plasma to finish his IQ2U formula. He succeeds, but Darkwing Duck appears. During the fight, Bushroot spills some of the concoction on the pavement. When Gosalyn comes to her father's aid, she trips and falls into it. Her mistake also gives Bushroot a chance to escape with the rest of the potion. Gosalyn's mutation takes a while to kick in and isn't visible until the next morning, when she has become a voracious blob creature. While Darkwing tries to find a cure for his daughter, Bushroot has problems of his own. He poured the IQ2U concoction on a hedge to create himself a friend, but the creature, Hedgy, came out more like Spike than like him, just with more goo on him and a bigger appetite. To feed him, Bushroot breaks into the St. Canard plant nursery the following night. Darkwing arrives to stop him, but Hedgy steps in to devour him and Launchpad. However, Darkwing brought Gosalyn along to prevent her from eating all the furniture in their house and she saves them, announcing herself as Yucky Duck. The villains escape during her intro speech, but Darkwing sees potential in Gosalyn's slime powers. As they leave to find Bushroot, said plant mutant watches them from a distance, intrigued by Yucky's similarity to Hedgy. Hedgy's mutation reaches its end then and he melts down into a puddle. Bushroot decides to go after Yucky as his new friend and later finds her alone when she's fled her father's selfish treatment of her new abilities. She agrees to come with the fellow plant mutant to his hideout, but once there, her own condition starts deteriorating. Bushroot creates a new version of IQ2U to make himself more friends and, uninterested in Yucky now that she's losing sapience, collects her in a containment chamber to cultivate her. Darkwing and Launchpad come to rescue her, but Spike gets hold of the IQ2U test tube and buries it outside. Bushroot and Darkwing follow, and come face to face with Lawn, the lawn turned alive. She's hostile, so Darkwing gets a flock of sheep over to eat her alive. In return, Bushroot lets Yucky go to be cured and drops his IQ2U plans. Slime Okay, You're Okay

In an alternative dimension, Darkwing comes into contact with IQ2U and becomes a permanent crimefighting blob. Crisis on Infinite Darkwings, Part 4

In an alternative dimension, Darkwing comes into contact with IQ2U and becomes a permanent crimefighting blob. Crisis on Infinite Darkwings, Part 4

Retrieved from "https://darkwingduck.fandom.com/wiki/IQ2U?oldid=18039"
Community content is available under CC-BY-SA unless otherwise noted.