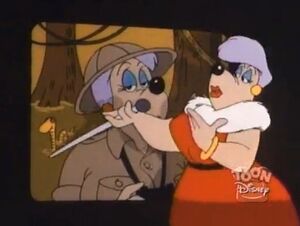 Howell is one of the rich and refined of St. Canard. She is the owner of Howell Publishing and with it the world's largest newspaper chain. A true socialite, Howell is involved with various projects to promote art and culture and raise money for charity. It has made her a target of villainry on more than one occasion.

She has two different voice actors, neither of which are known.

Ms. Howell lives in Howell Manor in St. Canard, a city in which she also has a printing press plant. Howell Publishing's entire selection is unknown, but contains the largest newspaper chain in the world, the Daily Examiner Times. Howell invests her extraneous fortune where it's useful and visible. She has her own wing in the city museum, where art and artifacts in her possession, such as the Chameleon Diamond, are on display. The entrance to the Howell Wing is marked by a large statue in her image. Calm a Chameleon She also is involved with a number of charities, such as nature preservation Can't Bayou Love and school funding. Slaves to Fashion

Howell does suffer some of the stuck-upness to be expected from the elite, but more than that she is a generous person. To her, philanthropy isn't merely donating money, but also raising it by organizing benefits and occasionally going out and sacrificing luxury to acquire the personal experience needed to convincingly rally for her chosen cause. And she's not about to let some criminal run off with the donations. Whereas others may flee in terror, Howell will stand her ground to keep the funds in the right hands. Can't Bayou Love

Howell is a dog with beige fur and purple-grey hair. She's of medium height and large in a curved way. When not in an environment unsuited for it, her fashion choice is one for fancy dresses with expensive jewelry.

Howell has just returned from an expedition to the bayou for the Save the Bayou Foundation. She organizes a chic evening with delicacies and candlelight to host a presentation on her expedition to raise awareness and money for the endangered species of the bayou. She's just showing a photo of the rare Yellow-Tailed Bayou Water Moccasin when suddenly Gumbo and Jambalaya Jake rip through the screen. The guests bolt in terror, but Howell, shocked, stays. Gumbo goes for the food while Jake gets his hands on the donation bowl, claiming it on argument that he is a bayou native. Howell tries to grab it back, but Jake kisses her and she lets go in disgust. Darkwing Duck comes to the rescue and retrieves the money. Howell thanks him profusely, but he cuts her off by shoving a baseball glove over her snout so he can go after Jambalaya Jake and Gumbo before they get away. Can't Bayou Love Another time, Howell comes in the visor of Camille Chameleon for two perks. The first is that, as the owner of her own printing press plant, Howell has access to the equipment needed for counterfeiting. The second is that Howell is the owner of the Chameleon Diamond, which makes for a convincing distraction for Darkwing Duck. Camille mimics Howell's shape to lure Darkwing towards a time bomb hidden atop a statue of Howell and to make herself a fortune at the plant in one go. Calm a Chameleon Tuskerninni has arranged that a substantial portion of the attendees of the School Masquerade Benefit will rent his hypnogas-prepped costumes. Howell becomes a victim of his when she picks a Baroque-esque dress from his collection. Tuskerninni throws up some theatrics about his inability to provide her with complementary costume jewelry, manipulating her into wearing her most valuable genuine jewelry. Howell also is the one to oversee the donations, allowing Tuskerninni to grab the money and her jewelry in one go during the benefit. By this time, Darkwing is on to him and has Howell tell him where she got her dress so he can go after the crook. Slaves to Fashion

Retrieved from "https://darkwingduck.fandom.com/wiki/Howell?oldid=21286"
Community content is available under CC-BY-SA unless otherwise noted.