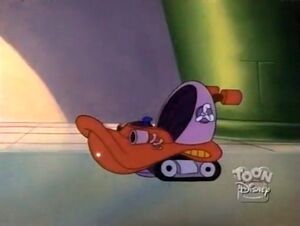 The Hoverquack is a high-tech wheelchair designed by SHUSH for Darkwing Duck. He never even got to use it before it was destroyed.

The Hoverquack is a creation by the scientist of SHUSH based on instructions by Darkwing Duck. It is an automated wheelchair with combat vehicle qualities. It has a jumping mechanism, lasers, confetti-filled cannonballs, and appears to have claws on its sides for unknown purposes. The Hoverquack was destroyed by Taurus Bulba in less time than it took to be assembled.

Limited by two broken legs, Darkwing orders parts for a one-man vehicle fit for a wheelchair user from SHUSH. Launchpad McQuack takes nine hours to assemble it, and Darkwing's impatience adds some hours more when he hops in before the paint has dried. With Taurus Bulba back in action, Darkwing accepts to not use the Hoverquack for a little while longer and to join Launchpad in the Thunderquack. A big miscalculation on Darkwing's part is that he has not told Gosalyn about Bulba's return and simply grounded her to keep her safe. Gosalyn reasons that because she has done nothing wrong that her father could possibly know about, she is grounded to keep her from discovering a surprise. This only encourages her to escape with Honker's help and get over to Darkwing Tower to find her gift. Once they get there, she assumes the Hoverquack is her birthday present, even if her birthday isn't in another three months. She takes Honker for a test run, which ends them up on the public portion of Audubon Bay Bridge. There, Taurus Bulba finds them. Gosalyn goes temporarily on off mode at seeing her old tormentor she'd assumed dead again, so Honker takes over the controls. He tries to get away, but Bulba remarks that kids won't beat him. Being called a kid snaps Gosalyn out of her pause and she retakes the controls to attack him. Not knowing how the vehicle works still, this is not a good idea. Bulba simply picks them out of the Hoverquack just before Darkwing arrives and takes control of it. He, however, also doesn't know how it works and when he tries to flee, Bulba blows apart the Hoverquack. "Steerminator"

Retrieved from "https://darkwingduck.fandom.com/wiki/Hoverquack?oldid=15098"
Community content is available under CC-BY-SA unless otherwise noted.