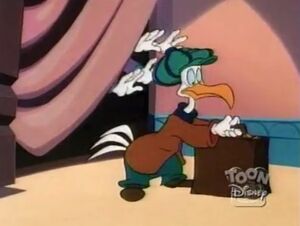 Horatio is the right-hand man of Phineas Sharp, with whom he is on a first-name basis. Unlike his boss and the other henchmen, Horatio is not a hardened criminal. His work primarily consists of administrative duties and similarly supporting functions, which Sharp trusts him unconditionally with.

Horatio appears to have been the assistant of Phineas Sharp for a good while, preceding the employment of the other henchmen. It is his job to ensure the schemes of Sharp proceed smoothly and to report on any developments that might interest his boss. When there's no immediate work to be done, Sharp appreciates Horatio's presence as someone he can share his plans and (envisioned) victories with.

Despite Sharp's defeat in the case of the SHUSH agent list, Horatio and the other henchman remain free.

"In Like Blunt" Horatio and the bulldog henchman visit The Old Haunt in St. Canard. While the other shoots pool, Horatio throws darts until the unexpected arrival of negatron-Darkwing Duck. He and Megavolt get into a fight that Megavolt loses, after which Horatio and the rest of the patronage flee. He return later that night when it is safe, only to be disturbed by a second arrival of the crimefighter. "Negaduck"

Retrieved from "https://darkwingduck.fandom.com/wiki/Horatio?oldid=20836"
Community content is available under CC-BY-SA unless otherwise noted.