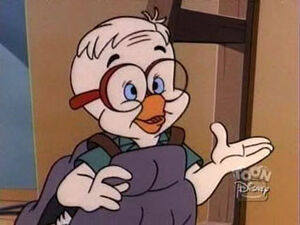 Herbert "Honker" Muddlefoot Jr. is a supporting character from the Darkwing Duck series, voiced by Katie Leigh. He is 9 years old, shy, brainy, and Gosalyn's best friend. Honker is the younger son of Herb and Binkie Muddlefoot, and his older brother is Tank.

Honker's family is neighbors with Drake Mallard and he is school mates with Gosalyn. It is strongly implied that Honker either figured out or some how discovered that Drake Mallard is Darkwing Duck off-screen, but how he met the Mallard family is never shown in the series. Due to Gosalyn's involvement, Honker often helps Darkwing Duck and Launchpad McQuack in solving difficult cases.

Herbert "Honker" Muddlefoot Jr. Jurassic Jumble is Gosalyn's polar opposite in so many ways: he is shy, nebbish, introverted, and at least a little bit timid. He's allergic to virtually everything in his environment, and is voiced with a constant case of stuffy nose. He's also wildly intelligent for his age, and has a grasp of many advanced scientific disciplines including moleculuar biology and chemistry as well as reptillian physiology and classic art and literature. He's a member of the Young Astronomers Club Son of the Return of the Revenge of the 3-D Man and an outlier in his family, which sometimes makes him feel lonely. Battle of the Brainteasers

As the brain to Gosalyn's brawn, Honker often feels inferiority complexes when unable to keep up with his redheaded best friend. Notable occasions include his feelings of insecurity at being unable to succeed in indoor baseball shortly before the mind controlling alien hats return in "The Revenge of the Return of the Brainteasers, Too!" and also lead to an existential crisis when he was accused of lying when Splatter Phoenix kidnapped Gosalyn and trapped her in a painting.

A more extreme example occured in "Calm a Chameleon" when he lamented not being assetive or tough enough, and Darkwing Duck provided him with a manual to reinvent himself. He then became "Spec" (a nod to his need for glasses) a juvenile delinquent biker who was largley a spoof of James Dean's character in "Rebel Without a Cause." Eventually Honker was forced to learn to be himself when it was his brains, not his devil-may-care attitude, which defeated Camille Chameleon.

While Honker is shy and nebbish, by the standards of the nerd trope he is actually fairly brave, following both Gosalyn and Darkwing into dangerous situations with little complaint and only common-sense concerns voiced. Despite his stutter, he is well spoken and well versed. Honker is also incapable of lying as per Gosalyn "I tried to teach him, but the lessons never took."

A Duck by Any Other Name That Sinking Feeling Getting Antsy Battle of the Brainteasers Trading Faces Hush, Hush Sweet Charlatan Heavy Mental Duck Blind Aduckyphobia A Brush with Oblivion Easy Come, Easy Grows Negaduck Bearskin Thug Calm a Chameleon Jurassic Jumble Tiff of the Titans Slaves to Fashion Cleanliness Is Next to Badliness Night of the Living Spud Toys Czar Us Life, the Negaverse and Everything A Revolution in Home Appliances Darkwing Doubloon The Secret Origins of Darkwing Duck When Aliens Collide Going Nowhere Fast It's a Wonderful Leaf The Incredible Bulk Let's Get Respectable Twin Beaks Dances with Bigfoot Whirled History The Quiverwing Quack A Star Is Scorned Dirtysomething The Revenge of the Return of the Brainteasers, Too! Star Crossed Circuits Steerminator

Liquid Diet Salad Daze! Slip, Slidin', Away Hero for a Day Son of the Return of the Revenge of the 3-D Man Video Pirates Show and Tell Highspeed Hijinks The Family Way

Honker and Gosalyn.
Add a photo to this gallery
Retrieved from "https://darkwingduck.fandom.com/wiki/Honker_Muddlefoot?oldid=26115"
Community content is available under CC-BY-SA unless otherwise noted.