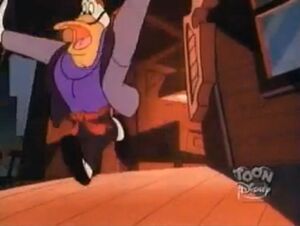 Ho isn't much for words when deeds can do the talking. If someone needs to be strongarmed or gotten rid off, he can do that. He is a favored partner-in-crime of his cousin, Cinnamon Teal, who makes for a fine leader between the two of them.

Ho is from the Republic of Singapore, where he is active in the criminal scene. It's possible he has a job as bouncer at the Cloak & Dagger Club, a notorious hangout for spies where sometimes someone just has to disappear. Otherwise he hangs out in the basement there for that purpose by arrangement of Cinnamon Teal, his cousin whose brain complements his brawn. DuckTales

As someone whose skill set works better as a henchman than independent party, Ho makes for an excellent enforcer. This is enhanced by his propensity to remain quiet, meaning any secrets entrusted to him are safe. DuckTales In his spare time, he enjoys a good game of cards. Negaduck

Ho is a large, muscular, white-feathered duck with black hair done in a queue. A Fu Manchu moustache adorns his large beak.

In the basement of the Cloak & Dagger Club, Ho attempts to kill Scrooge McDuck, Huey, Dewey and Louie on orders of Cinnamon Teal. Before anything irreversible can be done, Cinnamon shows up and tells him to let them go because an alliance might work in all their favor. Scrooge accepts after an intimidation game by the two criminals. DuckTales

Ho is playing cards at The Old Haunt when negatron-Darkwing Duck comes in. He and Megavolt get into a fight that Megavolt loses, after which Ho and the rest of the patronage flee. He might've returned later that night. Negaduck

Retrieved from "https://darkwingduck.fandom.com/wiki/Ho?oldid=20837"
Community content is available under CC-BY-SA unless otherwise noted.