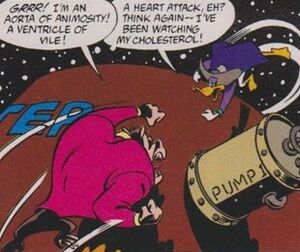 As the largest and physically strongest member of the Suits, Heart is the first to be sent forth when something or someone needs a good mangling. He is loyal to Pokerface and has a way with words.

Heart is one of the four people brought together by Pokerface to form his gang. Being as strong as he is, he relies on his fists when dealing with an opponent. He and the others operate from Pokerface's office in One Chump Plaza Casino.

Far from big and simple, Heart possesses a vast vocabulary he employs for peppering his speech with alliteration.

Heart is a gorilla and a hulking mass of muscle. He's got dark brown fur and wears a hot pink suit without pants.

The Suits assist Pokerface in a scheme to poison the water supply for One Chump Plaza Casino with gambleholic toxin to make the patrons spend all they have. Darkwing Duck picks up their trail when the kill the city controller and crashes Pokerface's office. The four beat and tie him and Launchpad up, then leave with Pokerface to the water tank on the roof. Darkwing won't stay put, though, and comes after them. Because Darkwing himself has fallen victim to the gambleholic toxin, Launchpad has to bet him he can't defeat them to make sure he has a chance. Heart is the first to attack, coming after Darkwing with brute strength and alliterative boasting. Darkwing jumps atop his shoulders kicks himself off, smashing Heart's face into a nearby pump and taking him down. Feeling Flushed

Retrieved from "https://darkwingduck.fandom.com/wiki/Heart?oldid=20660"
Community content is available under CC-BY-SA unless otherwise noted.