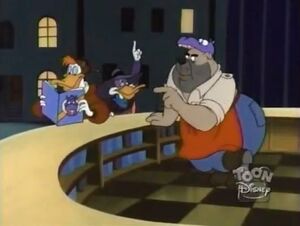 The cook appears to have had to put up with several robberies during his fast food career, because he barely reacts to threating situations and almost routinely points out the register. Non-paying customers he is a lot less calm about. As a cook and stand keeper, he's doing his job well enough that his restaurant is Launchpad's favorite. Getting Antsy

The cook has a dry sense of humor Getting Antsy and is generally unimpressed with what happens around him unless it is something severely out of the ordinary. He likes horror movies. Twitching Channels

The cook is a corpulent bulldog with beige skin and a stubble. For his work, he does don the Hamburger Hippo cap, but otherwise chooses his own clothes over the company uniform.

Launchpad and Darkwing Duck stop at the cook's Hamburger Hippo outlet for a meal, but the cook mistakes the masked hero for a criminal and tells him to take the money as long as he doesn't shoot. Darkwing is amused until the cook goes from being afraid to calling him a weirdo upon learning he is not a danger. After the two crimefighters depart, the cook hears a strange noise behind the restaurant and goes to look. When he turns around, his restaurant are gone. Darkwing and Launchpad return because Launchpad forgot his scarf and the terrified cook tells them all he knows, then hides in a nearby dumpster. Getting Antsy The cook is just about to watch a horror movie on Chiller Diller Theater when Megavolt, now able to travel through televisions and programs, pops out of the screen and grabs a large amount of cash from the register. The cook is too stunned by what he just saw to mind the robbery. Twitching Channels The cook is at work in the kitchen when Megavolt comes in with his nervous energy drainer and blasts him for his energy. Inherit the Wimp

Retrieved from "https://darkwingduck.fandom.com/wiki/Hamburger_Hippo_cook?oldid=24582"
Community content is available under CC-BY-SA unless otherwise noted.