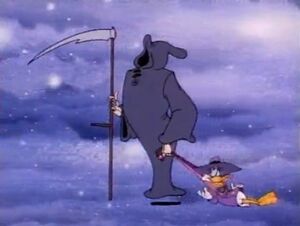 The Grim Reaper has the most unenviable job in the world and he's stuck with it for eternity. He's seen it all: people who beg for mercy, people who try to barter or bribe, people who threaten him, and people who think they can outrun him. In the end, he gets them all because time is on his side. This doesn't mean he likes to deal with difficult customers. It hurts the Grim Reaper that nobody respects him, his job, or what he has to put up with. It's not like he enjoys dragging people to the afterlife, but it's his place in the system. It would be great if people understood that and just cooperated, but he knows that's not a realistic expectation.

He is voiced by Tony Jay.

The Grim Reaper has been doing his work for millennia and has grown weary of it. Few are the people who come with him willingly and he especially doesn't like it when people question his academic accomplishments as if in all his time of existence all he's done is play fetch with souls. He's more educated than any of his customers ever had a chance to be, after all, no matter how time-consuming their antics can get while they're under his care.

Over time, the Grim Reaper has developed a dry sense of humor to deal with his customers, though he prefers to be straight with them. He doesn't hide the fact that he is greatly bothered by those who try to get out of his grasp as if that's a possibility to begin with and doesn't require him to work overtime. It also rather hurts his feelings. Due to generations of people trying to outsmart him, he's obtained one minor weakness in his sense of duty: a proper challenge to his intellectual and physical capabilities. Certain of his all-around expertise, he's likely to accept and he respects the wager even if he loses.

As per tradition, the Grim Reaper is a tall being who carries a scythe and is dressed in a cloak, albeit a dark grey one instead of a black one. Only his bony hands are visible and he floats just a little above the ground.

Quackerjack has a toy line based on the Grim Reaper. He also dressed up like him once. "Toys Czar Us" After Darkwing Duck escapes both Hell and Heaven to make his way back to his loved ones, the Grim Reaper comes after him. Darkwing at first runs from him, tricking the Grim Reaper in believing Drake Mallard is in the house next door. When the Grim Reaper drags Herb Muddlefoot out of his house, Darkwing lets his conscience speak and shows himself. He manages to lose the Grim Reaper, but the latter catches up with him just as he tries to save Gosalyn and Launchpad from Megavolt. The Grim Reaper is insensitive to Darkwing's pleas and attempts to bargain, but when he is challenged to a hand trick in exchange for an extra hour Darkwing can use to save his family, he is confident he can't be beaten anyway. He is, and so he grants Darkwing an extra hour. When the time is up, he goes to get him at Morgana's home and Darkwing comes with him peacefully only until they're out of the door. Then it turns out to be all a dream. "Dead Duck" Moloculo Macawber prepares his family for battle with the villagers with the line "Lets win one for the Grim Reaper!". "Monsters R Us" Morgana has a Grim Reaper-decorated wristwatch. Oddly, it shows his face. "Hot Spells"