This article requires immediate Cleanup in order to meet a higher standard.
Help improve this article by improving formatting, spelling and general layout

Gosalyn Mallard (born Gosalyn Waddlemeyer) is the adopted daughter of Drake "Darkwing Duck" Mallard. Much of the show is based on Drake and Gosalyn's father-daughter relationship. Gosalyn is shown to be an spirited, cute, spunky, athletic and tomboyish 9-year-old girl who often gets into trouble. She is very bright and often finds loopholes within her own promises allowing her to get her own way. Her wit is just as quick and acerbic as her adoptive father's, and she is often brave to the point of foolhardiness. She is also forthright and honest with her friends and idolizes her father.

She was voiced by Christine Cavanaugh.

Gosalyn was an orphan who lost of all of her biological relatives after her grandfather, Professor Waddlemeyer, perished at the hands of Taurus Bulba's henchmen.

Before his death, Professor Waddlemeyer developed a highly destructive government secret weapon called the Waddlemeyer Ramrod. In a dastardly attempt to steal the Ramrod and arm it, the nefarious Taurus Bulba kidnapped the professor's last known living relative, young Gosalyn, from the St Canard Orphanage believing she knows the secret arming code.

Fortunately, Gosalyn was rescued by Darkwing Duck at that very moment. He kept her safe in his secret hideout atop a tower on the Audubon Bay Bridge. Unbeknownst to Gosalyn, Prof. Waddlemeyer had secretly taught the code to her in a lullaby he used to sing to her each night. Bulba learned of the secret and was nearly able to carry out his conquest of St. Canard. Darkwing, with the help of his newfound sidekick, Launchpad McQuack, was able to save Gosalyn and the city. During their time together, Gosalyn and Drake grew quite fond of each other, and he eventually adopted her from the orphanage after sufficiently recovering from his injuries from the battle.

Knowing her adoptive father's secret identity, Gosalyn has occasionally donned a crime-fighting costume herself. First she called herself the "Crimson Quackette," but later, after developing an interest in archery, she began calling herself the archer Quiverwing Quack. Her first appearance as Quiverwing Quack was in the episode of the same name, where she was instrumental in defeating the plans of Negaduck. Later, in "Paint Misbehavin'", she helped to defeat the criminal Splatter Phoenix. Gosalyn's best friend is the brainy young Honker Muddlefoot, who also knows of Drake Mallard's superhero identity. When Gosalyn decided to become a superhero, Honker was always drafted as her sidekick; most notably as the Arrow Kid, when they proved themselves to an adoring public against the series' villains and making Darkwing jealous!

The theme of Gosalyn wanting to be her father's sidekick or a costumed hero in her own right was a continuing theme in the series. Her aliases include:

In "That Sinking Feeling", Gosalyn suggests two superhero identities: the Masked Mallard and the Scarlet Quackette. While the Scarlet Quackette seems a predecessor to her Crimson Quackette identity, her costume considerations include yellow and orange, which she never wore. She may have also been experimenting with another, unnamed identity in "Film Flam" after encountering the movie zombie.

Gosalyn getting hurt or worse is one of Darkwing's greatest fears, which is why in one possible alternate-future she encounters Darkwarrior Duck, a fearsome Darkwing who went mad after her seeming disappearance years earlier. This and other incidents have made Gosalyn appreciate her father's fears a bit better.

Gosalyn loves Darkwing as her father as much as she idolizes him as a costumed hero. She also loves Launchpad in the same way, and more than once he has said he would adopt or watch over her should anything happen to Darkwing. It makes for an odd household, especially by the standards of the early 1990's, and since the identities of her biological family are never explored beyond the pilot episode "Darkly Dawns the Duck." Further complicating the household is Darkwing's relationship later in the series with Morgana Macawber, which Gosalyn encourages and meddles in repeatedly.

This actually leads to later dealings in magic, with mixed results. One time she successfully makes a potent love potion, but can't manage to use it on the right duck at the right time. Another time she is admitted to Morgana Macawber's magic alma mater, only to take the easy way out and almost cost her father his immortal soul. "Hot Spells"

Both Gosalyn and Darkwing have their own fan clubs in "A Star Is Scorned". She is also a Whiffle Boy fan. Gosalyn acts as the apparent president of the Darkwing Duck fan club in its various incarnations.

Gosalyn and her father both have fierce egos, which causes them to come to loggerheads often, especially on those occasions when they are both trying to be heroes, such as her outings as Quiverwing Quack. Each time, though, they reach a grudging admiration for the other.

Gosalyn can be impulsive, brash, and short-tempered. She is just as vain and egotistical as her father at times. She is also fiercely loyal to her friends and family, willingly putting herself in harms way to help them. She is strongly athletic, often pulling off trick shots with a baseball bat, bow and arrow, or hockey stick which should be otherwise impossible.

Gosalyn is very quick witted and smart mouthed; often justifying her actions through loopholes in her promises or her father's edicts and punishments. In fact, in the comic books published 2010-2011 by Boom Studios, Gosalyn had been moved by her father to a private school simply to provide her enough challenge, indicating that she is definitely in the "gifted" bracket at least so far as brains go. This would be backed up on-screen by her many home-made gadget arrows as Quiverwing Quack. She has also gone toe-to-toe with the likes of Steelbeak and Negaduck, and come out ahead. But sometimes she out-thinks herself, such as when "Crimson Quackette" repeatedly mistranslates Bigfoot speak and gets Darkwing into further troubles with their volcano god, or when she inadvertently sabotages a fight between Morgana and Darkwing using a love potion she manages to concoct.

"Kitchen Clean-Up" "Sleep Ducking!" "Batteries Not Included" "Megavolt Pulls a Switch" "Faster Than a Speeding Ticket" "Flower Power" "A Picnic Is No Picnic" "The Big Snooze"

In the DuckTales reboot, she is voiced by Stephanie Beatriz. 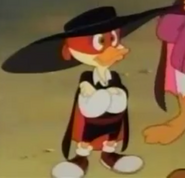 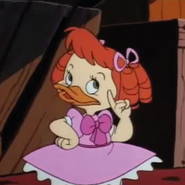 Negaverse Gosalyn, who is sweet and polite.