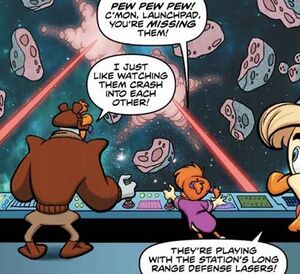 The Gorblatt Nebula is a nebula located nearby Earth. The satellite headquarters keeps surveillance on it.

The Gorblatt Nebula is an uninhabited part of space that exists in close proximity to Earth. It is part of the scope of SHUSH's space observation program enabled by their possession of the satellite headquarters.

Darkwing is brought aboard the satellite headquarters to get him in on the project. While he is being introduced to Desiree Bell, Launchpad and Gosalyn wander off and find the control panel for the station's long range defense lasers. The control panel also shows the Gorblatt Nebula and the two mistake the setup for Space Kerfuffle IV: Wormholes of Kremblex. The start "playing", in actuality destroying part of the nebula, until Doctor Bell spots them and hastily puts an end to it. Orange Is the New Purple, Part 1

Retrieved from "https://darkwingduck.fandom.com/wiki/Gorblatt_Nebula?oldid=20966"
Community content is available under CC-BY-SA unless otherwise noted.