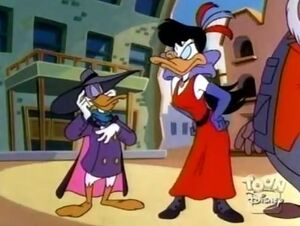 Gloria Swansong is an actress known almost as much for her numerous marriages as she is for her talent. And even that pales compared to her reputation for being stalked by a phantom who kills her husbands and male co-protagonists alike. Gloria is far from untalented or unmotivated, but she is conceited and ill-tempered, making her difficult to work with. The recurring deaths or serious injuries of co-stars haven't done her any favors either, but she's stubbornly working her way back up towards the top.

She is voiced by B. J. Ward

Early in her acting career, Gloria Swansong became married to Newt Glimmer, a colleague who gave up his own career to support her as househusband. Newt considers himself to have been faithful, while Gloria derides him for his inability to properly perform housework. Newt appeared to have died after a lemming incident and Gloria moved on, remarrying in due time. It was then her curse started. Her second husband died too, only he was murdered by a cloaked figure that came to be known as the Phantom. This figure, rumored to be the ghost of her first husband, would turn up whenever she remarried until she was widowed a grand total of 27 times. Aside from Newt, her list of husbands includes Thaddeus, Bud, Oliver, Lou, Stan, Anatole, Vladimir, Houston, and Brick. Male co-protagonists weren't safe from the Phantom either, sabotaging Gloria's career opportunities. While working on Space Duck: Attack of the Teenage Mutant Martian Mallards XII, Gloria herself became the target of the Phantom, who turned out to indeed be her first husband, just not the "ghost of". He was defeated by Darkwing Duck, presumably leaving Gloria alone after that.

Gloria is identified as a "star of stage, screen, and countless deodorant commercials". Whether her being prolific in the area of commercials comes from this being the starting point of her acting career or is a result of commercials not needing a male co-star and therefore being immune to Gloria's stalker isn't clear.

"Nasty" might be harsh for Gloria's disposition, but it's not an undeserved verdict. The actress only has eye for number #1, that being herself, and her attitude to her surroundings depends on its accommodation to number #1. In all fairness, some of this might be the result of stress due to the Phantom wreaking havoc on her romantic and professional lives. Although she could do little against the Phantom, her conviction she belongs on the silver screen kept her from throwing in the towel. Naturally, this choice affected not only her, but also her coworkers. Gloria does not seem to experience any guilt over that.

Gloria is a white-feathered duck of slender build and medium height. She has a medium-sized beak and either restyles her hair constantly or owns a lot of wigs.

Gloria has a leading role in Space Duck: Attack of the Teenage Mutant Martian Mallards XII, directed by Tuskerninni, and works her vocal cords to give one scream of a performance until Darkwing Duck shows up and, unaware that the alien abduction is not genuine, ruins the take. She gives him a mouthful not to get in the way of her return to true stardom, then redoes the scene until her protagonist colleague gets zapped by a prop gun that is actually loaded. Unbeknownst to anyone, this is part of Tuskerninni's plan to make the movie a failure so A. F. Erret Studios will go bankrupt. Gloria Swansong was cast specifically for her misfortune at the hands of the Phantom shadowing her. Another scene is shot the next day on studio grounds with a new male co-star for Gloria. This time, it's openly the Phantom who commits grievous bodily harm. Tuskerninni casts Darkwing as the new male lead for another scene to distract him from his investigation and preferably get him killed. Gloria refuses to work with the "ham" at first, but is swayed by the argument that no one else is left to take the role. Many attempts at Darkwing's life are made, for which Erret blames Gloria on account of the Phantom. Soon after, the two are taken prisoner by Tuskerninni, who prepares to kill off everyone involved with Space Duck: Attack of the Teenage Mutant Martian Mallards XII in one large explosion. He, in turn, is tied up to be blown up along with the others by the Phantom, who reveals himself to be Newt Glimmer, Gloria's first husband. His villain exposition takes long enough that Darkwing can initiate an escape plan. Once Newt and Tuskerninni are dealt with, A. F. Erret announces that Space Duck: Attack of the Teenage Mutant Martian Mallards XII remains greenlighted. "Hush, Hush Sweet Charlatan"