The Gizmosuit is a mechanical armor designed by Gyro Gearloose. It is activated with a pre-programmed phrase, upon which it'll latch onto the person voicing that phrase. Gyro has a minor tradition of choosing phrases that may seem rare, but happen to be the catchphrase of someone living not too far away. Gyro has built a minimum of one suit and possibly two. Once activated, a gizmosuit tends to be assigned to that person, but the suit is not imprinted on. Anyone who uses the key phrase near the suit will activate it and could potentially become the new owner.

Many have donned the suit over time, including Fenton Crackshell, Mrs. Crackshell, Launchpad McQuack, Webby Vanderquack, Huey, Dewey and Louie, Solego, and Gosalyn Mallard. Mrs. Crackshell and Gosalyn are the only ones who took up an identity different from Gizmoduck, dubbing themselves respectively Gizmomama and Gosmoduck.

Gizmoduck's design changes slightly between DuckTales and Darkwing Duck. In Ducktales, the Gizmosuit is very large and has black upper arms and accents. In Darkwing Duck, the gizmosuit has shrunk lightly, and has lost it's black upper-arms. 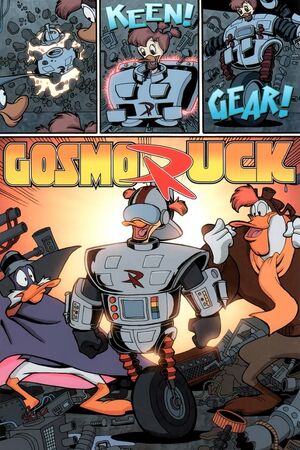 An iteration of the Gizmosuit surfaces in Boom Studios comics The Duck Knight Returns where the size and black arms are restored, as well as adding a slightly rounded look, and ports which allow Gosalyn Mallard's trademark pigtails to poke through the helmet. This suit was stolen by Taurus Bulba from Gyro Gearloose, and eventually acquired by Gosalyn when it reacts to her key phrase of "Keen Gear!", thus transforming the ten-year-old into Gosmoduck. Like the first generation suit, this suit is eventually destroyed in the line of duty, returning Gos to her "normal" life.

Retrieved from "https://darkwingduck.fandom.com/wiki/Gizmosuit?oldid=24662"
Community content is available under CC-BY-SA unless otherwise noted.