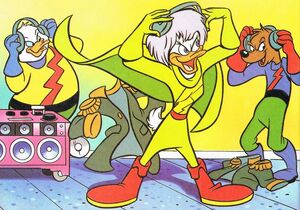 Frequencia knows what she wants to have — obscene amounts of riches — and how she wants to obtain it — while laughing her feathers off at any attempt too incompetent to stop her. To make all that come true, she and her henchmen have developed a sound machine capable of producing such a noise that anyone hearing it just mentally fries down for a good few hours if left unassisted. Frequencia's crew isn't immune to the effects either, but it's nothing a good pair of earmuffs can't solve. What earmuffs don't solve is Frequencia's need to gloat and show off her crime spree. She gets a kick out of announcing her plans and watching people futilely try to apprehend her or safeguard her intended loot. There's only so long before this comes back to bite her, but that's not a thought Frequencia is willing to entertain.

She is voiced by Linda Gary.

Given their showy uniforms and sound-based weaponry, odds are Frequencia and her henchmen are a band gone bad. Whether they created their sound machine, which shuts its victims down for a few hours and leaves their memory until shortly before the incident spotty, by accident and were hit with criminal inspiration or designed it for the purpose of heists is unrevealed.

Overconfident and risk-taking, Frequencia is the kind of person that sabotages herself. When she has a good modus operandi and even the faintest hint of success, she ups the odds against her by providing anyone out to stop her with the means to. She doesn't stop to think if it is wise, certain she'll remain the one laughing, and all gain she gets out of it is an ego boost that makes her all the more likely to repeat her aid to law enforcement.

Frequencia has soft pink hair atop her head, which she offsets with a loud lime green full-body suit with a cape, red accents, and a lightning bolt across her chest. The outfit, though not the colors, are the team uniform. 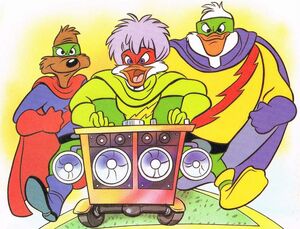 Frequencia and her henchmen find a way into Rockefeather Mansion, the home of Joan D. Rockefeather. After incapacitating her and the guards present with the sound machine, they take all the valuables present with them. Before they depart, they leave a note announcing the Watson Theater to be their next stop for loot. Darkwing Duck finds it and follows them to the theater, but he fails to identify the ushers getting up on stage with an odd table as the crooks he's looking for until they announce themselves. They put on their earmuffs and activate the sound machine, putting everyone present, Darkwing Duck included, out of it for hours; hours during which they take all money and jewelry present. As before, a note is left before they get out, this time marking the Gold Reserve as their target. But when Frequencia's troupe arrives, they find Darkwing to have enlisted Gosalyn to hand them a right-back-at-you. Gosalyn plays a clarinet solo of which Darkwing amplifies the sound, incapacitating the crooks and destroying the sound machine. "High Wave Robbery"