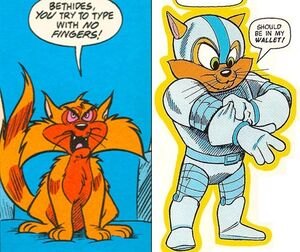 It is difficult to call Fluffy evil. He's foremost a victim of circumstances who tried to fill the void of his involuntary acquired identity as a genius-cat with villainy, but it did not work out in the end. Fluffy was born as a regular cat, but he was given super-intelligence by Doctor Meddle. With the awareness that he was only a test subject, Fluffy broke out and brought together a gang of street cats to do his bidding. This only satisfied him for so long, because he no longer was on the same level as the other cats, yet he also lacked aspects to fit in with people. To close the gap, he created a super-suit from empty tuna cans for himself. The suit can fly and contains a lot of weaponry, but it's the thumbs he's happiest with. After a few run-ins with Darkwing Duck, Fluffy returned to being a good kitty because villainy failed to live up to his expectations.

Fluffy began life as an ordinary cat, who rather than being kept as a pet was taken in to perform a task for his owner. The arrangement did not work out and Fluffy was thrown out in the rain. This probably happened within his first life year, "Fluffy's Reign of Terror!" after which he ended up in the care of Dr. Meddle of the St. Canard Research Center, who made him his primary test subject for intelligence-boosting research. Fluffy gained full super-intelligence around his second birthday, although at this point he pronounced his "s"s as "th"s and typing without fingers was a hassle. He needed mere days to know he did not want to stay a test subject and masked his subsequent escape as an abduction with a ransom to cover his St. Canard-take-over expenses. Once free, he brought together a gang of cats which, while not very bright, could run simple errands for him. His one miscalculation was Darkwing Duck, the one called to find him and who managed to capture him. Fluffy was brought to jail, although on what charges is unclear, rather than returned to Meddle, who had to promise SHUSH to cease all intelligence-boosting research. This included another experiment with a gorilla. "The Kitty Kat Kaper" During his short time in jail, Fluffy outgrew his speech quirk. After his jailbreak, he resumed his plans, operating in secret from an abandoned factory. His primary goal after reuniting his gang was the creation of a super-suit from tuna cans, which allows him a bipedal form and thumbs, as well as flight and a wide variety of weaponry. With this super-suit, he confronted Darkwing, whom he'd grown a slight obsession with, and defeated him. Fluffy subsequently took over the city for the benefit of its cats and moved his headquarters to Le Posh. But once in charge of St. Canard, Fluffy still lacked equals to keep him company. As such, he did not put up much of a fight when Darkwing returned to arrest him. In exchange for his cooperation, Fluffy was allowed to keep his super-suit's gloves while in jail. "Cat in a Hot Tin Suit" This time, Fluffy sat out his sentence, but he went back to villainy as soon as he got out. This time, he developed flee powder, which brainwashes non-mutated people into travelling as far away as possible. Darkwing teamed up with the mutant part of the Fearsome Five to stop Fluffy, who proved about as easy to defeat as last time because once more he started feeling lonely and wished to return to the company he had in the St. Canard penitentiary. "Fluffy's Reign of Terror!"

The short of it is that Fluffy has issues. Big ones. Ever since becoming a mega-genius, Fluffy has found himself in the middle of two worlds, of cats and of men, with an inability to belong to either. Because it is where his roots lie, he has a preference for the company of cats. Despite acquiring speech, he can still communicate with them. However, his brain capacity is far above theirs, meaning he can't communicate with them as an equal. His dealings with other cats therefor are limited to him giving orders and sometimes speeches he hopes time and time again get through to those he wants as his friends. Much of his motivation for villainous schemes is his way of reaching out by making St. Canard a cats' paradise. At the same time, he is aware that there's little to hope for unless he gives other cats the treatment he got, which they aren't open to. That's why, despite trying to subjugate "Cat in a Hot Tin Suit" and remove them, "Fluffy's Reign of Terror!" he also works to fit in with people. The foremost difference he considers there to be between him and them are thumbs, which he thus made for himself as part of the super-suit. He takes emotional support out of having them and gets distraught when losing them for more than just the practical aspect. Due to Darkwing Duck being his original adversary and in that sense an equal, unlike his creator Meddle, "The Kitty Kat Kaper" Fluffy has imprinted on him in a way that's not just built on hate and annoyance, but also on seeking the crimefighter's acknowledgement. When Darkwing faced him in his super-suit for the first time and told him to "fight like a man", Fluffy positively revelled in it. "Cat in a Hot Tin Suit" Darkwing's potential to feel sympathy for the mutated cat also is the foundation for Fluffy's willingness to negotiate his surrender with the crimefighter whenever his loneliness gets the better of him. "Fluffy's Reign of Terror!"

Fluffy did not need a lot of time to know he did not want to stay a test subject and masked his subsequent escape as an abduction with a ransom of 8,000,000 dollars to cover his finances when he'd be ready to take over St. Canard. "The Kitty Kat Kaper" "Cat in a Hot Tin Suit" "Fluffy's Reign of Terror!" 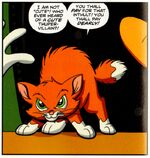 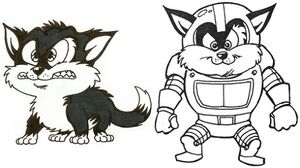