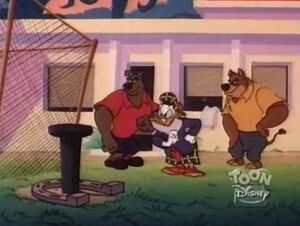 Flintheart Glomgold is the second richest duck in the world and therefore the main rival of Scrooge McDuck. He is obessed with financially surpassing the other, whether that is by making himself richer or Scrooge poorer. At times, he'll settle for merely getting the better end of a business deal, but just like Scrooge always remains richer he also always gets the most out of a deal, being just a smidge smarter. Flintheart owes his money to a sly mixture of legitimate business and illegal transactions, one seamlessly extending into the other. Although he prefers to be in sole control of his schemes, at times he sees a benefit in allying with or employing people with a more out-in-the-open track record of villainy.

While Scrooge McDuck carries the title of "Richest Duck in the World", it is a title others would gladly take from him. Notable competitors are John D. Rockerduck and Velma Vanderduck, but Flintheart Glomgold takes the cake. He's the stable holder of the title "Second Richest Duck in the World", which eats at him. Scrooge and Flintheart go a long way back and their rivalry for riches is a recurring reason for elaborate bets and schemes. Flintheart has his own Money Bin, which is located near the Limpopo River for reasons of solitude, but he also has a mansion in Duckburg and is a member of the Duckburg Billionaires Club.

In some ways, Flintheart is a mirror to Scrooge; a reminder of the man Scrooge could have been had he not had a sense of morals at the bottom of his personality and a family to be there for him. Flintheart is rotten with no sense of ethics as long as he can make a profit. He does have family, a nephew by the name of Slackjaw Snorehead and another only known as Junior, but he's rarely in contact with them. Glomgold is, outside of the public eye, a loner whose sole joys in life are becoming richer and the thought of one day one-upping Scrooge McDuck. To do this, he occasionally hires the Beagle Boys or forms an alliance with Magica De Spell or another of Scrooge's enemies. While Magica sees him as little more than a means to an end, the Beagle Boys enjoy working for Flintheart because of his dishonesty.

The two leading emotions Flintheart Glomgold operates by are greed and schadenfreude. Everything he does is to become richer. If he can't do so absolutely, he'll aim to do it relatively by harming the fortune of another, something that brings him no little mirth. He's the kind of crook that sails with loopholes and rows with deceit, keeping him safe from the law to find the best spots to observe the downfall he's caused. As much as Flintheart is a loner and a cheapskate, he does know that misery increases with the size of its audience and there's always funds available to get a number of extra eyes and grins over. It is close to the only way he does socializing.

Flintheart is an elderly white-feathered duck recognizable for his long grey beard and green tam o' shanter. He wears glasses, red gaiters, a blue jacket and a long green kilt.

Glomgold is among the people visiting Phineas Sharp's island resort to attend his auction, which main prize is a list of SHUSH agents. Until the hour of the auction, he plays a game of horshoe pitching against two of Phineas Sharp's henchmen. "In Like Blunt"

Glomgold listens to Donald's instruction for Duckburg to fight back against the ink. "Dangerous Currency, Part 4"

Retrieved from "https://darkwingduck.fandom.com/wiki/Flintheart_Glomgold?oldid=27758"
Community content is available under CC-BY-SA unless otherwise noted.