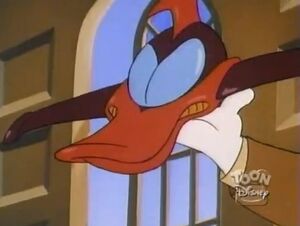 The Flashquack is a miniature version of the Thunderquack in design and serves to relay messages to Darkwing Duck either from SHUSH, Launchpad McQuack, and possibly other parties.

The Flashquack is a toy-sized miniature plane used to contact Darkwing wherever he may be. Its creator would most likely be SHUSH, as it is the organization that uses it the most and it fits with the other gadgets they've made for Darkwing. "Water Way to Go" At the same time, it is modeled after the Thunderquack, which is Launchpad McQuack's creation, "Darkly Dawns the Duck" so it is very well possible the Flashquack represents a rare cooperation invention, a status only realistically shared with Darkwing's spaceship. "When Aliens Collide"

The amount of Flashquacks in existence is unknown, but the model got updated at least once. The original model is primed for Darkwing Tower, but Darkwing can put it on Flashquack Forward to find him elsewhere he expects to be. "Trading Faces" As such, there's always a chance the message won't reach him. "Water Way to Go" Direct communication is not possible with the original model and the only use it has is getting a letter stored in the cockpit with either mission information "Cleanliness Is Next to Badliness" or an instruction to contact the sender. "Bad Tidings" This model got updated at some point to allow direct communication. The new model houses a videophone inside the cockpit. It's possible the updated model is exclusive to Launchpad, because it would be a danger if this Flashquack would find him during civilian hours. "Toys Czar Us"

Only J. Gander Hooter and Launchpad are confirmed to make use of the Flashquack, the former storing it in a safe behind a portrait in his office. "Water Way to Go" However, once when the message could not come from Launchpad, Darkwing still sounded surprised it came from SHUSH, suggesting there's at least one other party that can contact Darkwing by means of the Flashquack. "Trading Faces"

Following the deaths of 24 SHUSH agents on a mission in Oilrabia, J. Gander Hooter decides that it is time to get Darkwing Duck on the case. He gets the Flashquack from the safe, outfits it with a letter, and sends it on its way. It grazes Gryzlikoff's head on its way out, setting it aflame, but he grudgingly extinguishes it soon enough. The Flashquack enters Darkwing Tower through the underwater entrance to eventually deliver the message to Darkwing. "Water Way to Go" Darkwing has just caused an accident that has resulted in him and Gosalyn as well as Launchpad and Honker to switch bodies when the Flashquack arrives with a letter to contact Hooter as soon as possible. The situation requires some quick thinking, but Darkwing gets to know about the theft of the Iggy without raising suspicion about the current predicament. Investigation goes less smoothly, causing the thief, F.O.W.L., to reveal itself before Darkwing can obtain even one clue. Hooter sends him the Flashquack once more, again with an instruction to contact SHUSH for further details. As Darkwing is at home when he receives the message, he activates the coffee table to hear more. "Trading Faces" The Flashquack arrives in the yard of the Mallard residence to notify Darkwing of another assignment. Inconveniently, Drake is just stuck having to hear Herb's Quackerware sales pitch. To avoid detection, Drake grabs a large Quackerware bowl, captures the Flashquack in it, and buys the entire set Herb's currently carrying to be able to take the Flashquack with him inside. "The Merchant of Menace" Tidal waves are menacing the Earth and the Flashquack gets caught in one. It is still close enough to Audubon Bay Bridge to end on top of it, where it is found by Darkwing. The message inside urges Darkwing to immediately come to SHUSH Central. "Bad Tidings" The Flashquack arrives in Gosalyn's room when she and Drake are talking about starting a Darkwing Duck Fan Club. It contains a message on how last night multiple banks were cracked open and robbed in complete silence. Darkwing leaves the discussion to attend the case. "Cleanliness Is Next to Badliness" While Darkwing is investigating a robbery by Quackerjack at a toy store, the updated Flashquack comes flying in. It opens to reveal Launchpad on the screen, who informs Darkwing he is expected at Gosalyn's school for a parent-teacher conference. "Toys Czar Us"

Retrieved from "https://darkwingduck.fandom.com/wiki/Flashquack?oldid=20016"
Community content is available under CC-BY-SA unless otherwise noted.