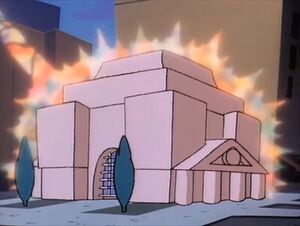 The Federal Gold Depository or Gold Reserve is a facility in St. Canard. Like St. Canard City Hall, it gets surprisingly rarely targeted by the thousand-and-one villains residing in the city.

The Federal Gold Depository is filled with bars of gold.

The Federal Gold Depository is the first target of Taurus Bulba once Darkwing Duck activates the Waddlemeyer Ramrod for him in exchange for Gosalyn's life. He first lifts the building into the air, then cracks it open and beams the gold into his ship. The building supposedly falls back to the ground when the beam lets go off it and the money follows later thanks to Darkwing's meddling when Bulba breaks his promise. Darkly Dawns the Duck, Part 2/Darkly Dawns the Duck

Frequencia pridefully leaves a note at the Watson Theater that the next place her gang will rob is the Gold Reserve. Darkwing finds it, but knows he doesn't stand a chance against her gang and their sound machine. He and Launchpad go to Gosalyn's school performance that evening. Gosalyn has a clarinet solo and when she plays, Drake recognizes it has exactly the same effect as the sound machine. He grabs Gosalyn from her performance and rushes with her and Launchpad to the Gold Reserve. Darkwing quickly arranges earmuffs for the three of them and loud speakers to amplify Gosalyn's music. They hide in the shadows and don't have to wait too long until, as promised, the three crooks enter. Darkwing urgers Gosalyn to play before they can don their own earmuffs and as expected, their minds fritz and the sound machine explodes, ending the threat. High Wave Robbery

Retrieved from "https://darkwingduck.fandom.com/wiki/Federal_Gold_Depository?oldid=19889"
Community content is available under CC-BY-SA unless otherwise noted.