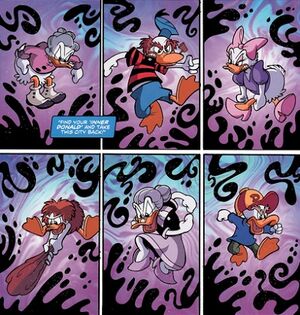 Elvira Duck, née Elvira Coot and in her old age better known as Grandma Duck, is the matriarch of the extended Duck family that predominantly lives in the city her grandfather founded: Duckburg. A farmer at heart, Elvira still runs the farm some distance from the city that she's owned since her 20s. Her husband has passed away and her three children already are parents and even grandparents, but the workload is shared by her live-in farmhand, Gus Goose, her brother's grandson. Being as old and spirited as she is, Elvira is a welcome presence in her family and often turned to for advice or as the central organizer of get-togethers.

Elvira is the granddaughter of Cornelius Coot, the founder of Duckburg, and the sole sibling of Casey Coot, the grandfather of Gus Goose. Back in the day, she married Humperdink Duck and had three children with him. Eider would go on to be the father of Fethry Duck, Daphne would become the mother of Gladstone Gander, and Quackmore would marry Hortense, the youngest sister of Scrooge McDuck, to become the father of Della and Donald Duck. Della is Elvira's only grandchild with children of her own already: Huey, Dewey and Louie. Elvira is addressed as "grandma" by Daisy Duck, who either descends from a sibling of Humperdink or is the sister of Della's husband.

Thanks to being one of Cornelius's only two grandchildren, Elvira inherited many acres of land in her adult years; more than she ever had real use for. Over time, she's sold most of her land, some of it to Scrooge, until only her current farm remains. The implication is that Elvira is quite wealthy, although such has never been demonstrated, if only because she prefers to live a simple life. Due to her age, good health, kindness, wisdom, and historical connection to Duckburg, Elvira is the undisputed authority figure within the larger Duck-McDuck-Coot family. Even members such as Scrooge, who takes pride in his selfmade independence, and Gladstone, who from his father's side of the family has inherited a sense of disdain for his mother's side, hold "Grandma Duck" in high regard.

Ever since she was young, Elvira has been taught the virtues of hard work and embraced them wholeheartedly. She is not opposed to modern technology or luxury, but she dislikes letting anything out of her hands she can do herself. It takes a lot of cajoling to get her to try something "new & improved" and it's likely that after testing she'll revert to her old means. This is not a loss, as Elvira is guaranteed to do a thorough job in her preferred way. Few people or machines can claim to clean, cook, farm, and inspect as well as she does or to have even a semblace of her backbone. Along with her generosity, these traits make her beloved and respected by her family, who gladly visit her farm or have her visit. Elvira is happy this way, spending her older days peacefully but for the occasional family hijinks to keep things lively.

Elvira is elderly duck with white feathers and grey hair, which she usually does up in a bun. She wears glasses and usually goes dressed in black, pink, and white. Her wardrobe is a old-fashioned with details such as lace, mutton chop sleeves, and shoes with gaiters.

Upon Donald's instruction for Duckburg to fight back against the ink, Elvira does so. Dangerous Currency, Part 4

Retrieved from "https://darkwingduck.fandom.com/wiki/Elvira_Duck?oldid=22002"
Community content is available under CC-BY-SA unless otherwise noted.