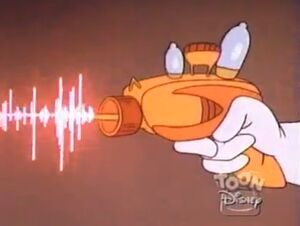 The electro-gun is Megavolt's primary weapon outside of his own mutant powers.

The electro-gun Adopt-a-Con is presumably an invention by Megavolt. When he takes it along, it is kept in a holster on his right hip that is connected to his belt. The buckle of the belt sports at least one button which sends a charge to the electro-gun. It might be the buttons decide which function is given to the electro-gun, as it's capable of at least three different rays. The first is a red ray with a graph-like silhouette. It is capable of magnetizing metal objects and manipulating it into any desired movement. Negaduck The second is a blue ray that destroys. Comic Book Capers The third, a pink ray, has an unknown function but seems to be meant for destruction too. Just Us Justice Ducks, Part 2 There might be a second version of the electro-gun if the fact that Darkwing has a photo of Megavolt wielding a black-colored one is anything to go by. Planet of the Capes

Megavolt fires a beam at a bag of ball bearings to charge them together into a wrecking ball. It's meant to hit Darkwing, but it hits Megavolt instead. A day later, at The Old Haunt, Megavolt is recharging, still sour about the wrecking ball incident. Negaduck, Darkwing's evil half, comes walking in and challenges Megavolt to a duel. Megavolt charges the electro-gun, but Negaduck throws water on him before he can shoot. Negaduck The Megavolt written in the Darkwing Duck comic book regularly uses his electro-gun to zap Darkwing and Launchpad. Comic Book Capers In dressing up as Megavolt, Tuskerninni paints a hand vacuum orange to make it pass for the electro-gun. Darkwing is tricked by neither disguise, also because Tuskerninni mistakes the weapon's name for "magneto-gun". Adopt-a-Con Megavolt uses the gun against Darkwing-disguised-as-Negaduck and soon after uses it in the battle of the Fearsome Five against the Justice Ducks. He has Darkwing again as enemy and would've fried him if not for Neptunia arranging for the Liquidator to collide with him. Just Us Justice Ducks, Part 2 While trying to teach Comet Guy to be a villain, Darkwing shows him a slide of Megavolt pointing the electro-gun at the camera. Comet Guy zaps the slide on instinct. Planet of the Capes

Megavolt uses the electro-gun in the battle of the Fearsome Five against the Justice Ducks. He has Darkwing as enemy and would've fried him if not for Neptunia arranging for the Liquidator to collide with him. Just Us Justice Ducks Part Two

Retrieved from "https://darkwingduck.fandom.com/wiki/Electro-gun?oldid=23348"
Community content is available under CC-BY-SA unless otherwise noted.