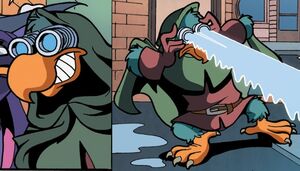 Eagle Eye is one of several people in St. Canard with a reason to be unhappy that got a new chance thanks to the ink. Whatever his unhappiness was, his gift or tool is being capable of shooting any sort of beam from either his eyes or his goggles.

As a supervillain, Eagle Eye either possesses eyes or goggles that shoot elemental beams of his choosing. Beam types he's shown to have under control are ice, fire, laser, electricity, and water, and possibly lava and watery goo. As with all ink-covered objects, it is unknown what happened to the goggles after Eagle Eye was defeated.

Eagle Eye isn't much of a talker.

Eagle Eye is a parrot of medium height with turquoise feathers. His supervillain outfit has a medieval look to it, being a brown tunic with long gloves and a dark green cape with hood. Obviously, he wears his goggles.

Eagle Eye fights Darkwing Duck, but Darkwing's thoughts are with the trouble he's having due to Launchpad McQuack being his election opponent and way more popular with the public. It's due to this distraction that Eagle Eye manages to capture Darkwing, who remains more concerned with the election than the immediate predicament he is in. Unexpectedly, it is illusion-Spike who defeats Eagle Eye. "Campaign Carnage, Part 3"