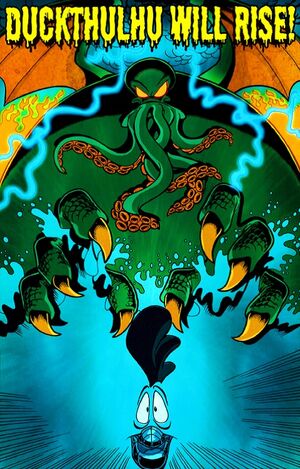 Duckthulhu is a powerful primordial entity. High Command tried to summon him in order to enslave mankind in "F.O.W.L. Disposition". He could mutate people into tentacled monsters that were slaved to his will; even before Duckthulhu had risen, the more weak-minded citizens of St. Canard had started to transform. F.O.W.L. were wrong in believing he could be controlled and Duckthulhu came close to winning before Morgana was able to stop him.

Retrieved from "https://darkwingduck.fandom.com/wiki/Duckthulhu?oldid=23908"
Community content is available under CC-BY-SA unless otherwise noted.