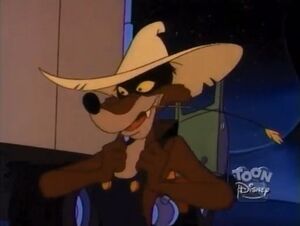 Duane is a truck driver in the employ of the government of the USA. He knows stuff, mostly of the unsettling and incredible sort. Although creepy, Duane is a fine and friendly fellow in the possession of a solid social network. In some circles, his name is good for unquestioned trust.

Duane grew up and presumably still lives in the St. Canard outskirts. He's a truck driver regularly entrusted with classified goods. He's not actually discreet about what he does, but his general demeanor either has people not believing him or wanting to do as little as possible with it all. Nonetheless, for people who are willing to listen and ignore his chronic spitting, Duane is a well of information that might just come in handy sooner than one thinks or likes.

Either oblivious to other people's discomfort or lightly sadistic, Duane is a blabbermouth who won't cease spilling secrets while reminding people they're not supposed to know. He never does provide full information either, leaving his audience at a loss what to do with what they did get. Still, Duane is reliable, helpful, and not shy to admit his on-the-job hours leave him feeling lonely at times. He holds a good reputation and many friends in the countryside

Duane appears to be a brown fox. He's thin and of medium height. He wears overalls and a straw hat and always has a long blade of grass or wheat dangling from his mouth.

While on a transport mission of frozen aliens for the government, Duane picks up two hitchhikers heading into the countryside: Darkwing and Launchpad. That is, he first drives over Darkwing because he walks onto the middle of the road at too short a distance for Duane to come to a halt timely. After pulling Darkwing from under his truck's wheels, he takes them along. Duane creeps out the duo by mentioning the aliens in the back and the government's involvement. Darkwing suggests they get off, but Duane counters that he likes company. Just then, he has to swerve to avoid hitting a giant potato in a dress that shows up on the road. Duane isn't as concerned about seeing a large, walking potato as he is about the fact it's a russet, which he knows can't be reasoned with. He elaborates that if his passengers ever would encounter a russet, they've got to say "potato backwards" while sprinkling it with the fresh pollen of a Lyceum Nycanthropus plant. A little further, he drops them off at a Hamburger Hippo stand and instructs them to watch out for the vampire roaming around and to tell Moe that he sent them. Darkwing pays no mind to either instruction, which would've spared him a painful vampire trial if he had. "Night of the Living Spud"