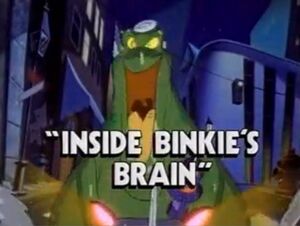 Dr. Slug is a ruthless villain occupying the spot of Public Enemy Number One in St. Canard. He is physician with ambitions of world domination, but although highly dangerous, he's a fairly social guy. He's on good terms with Megavolt, to the point he lets him use his stuff when he has no immediate need for it himself. Dr. Slug has made his hideout in a glue warehouse, which he has given a homey touch. 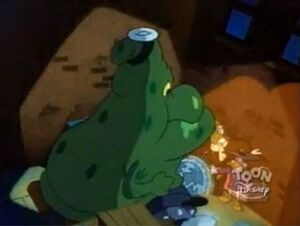 Given the head mirror, Dr. Slug is a physician-kind-of-doctor and probably has the necessary degrees. How he came to be what he is and whether he was a person or a regular slug first is unknown.

Dr. Slug can get a little crazy when he gets carried away in dreams of his soon-to-be global conquest, but he's a fairly level-headed guy who knows it's just as important to keep a handle on daily life as it is to design the perfect scheme.

As his name suggests, Dr. Slug is a slug. That he's green and slimy is to be expected, but his size is that of a small garage. Though he has no legs, he has arms. His only item of wear is a head mirror.

Dr. Slug is about to slice Darkwing Duck and Launchpad to ribbons when he corners them in an alleyway. The two only escape because Darkwing pauses the scenario so he can answer fanmail. Inside Binkie's Brain Dr. Slug takes Negaduck's spot on the public enemy list, which infuriates Negaduck so much he goes on a huge crime spree just to be Number One again. He fails miserably. The Quiverwing Quack Megavolt is flattered that Darkwing considers him his archenemy, having presumed that position to be held by Dr. Slug. The Frequency Fiends Dr. Slug lends Megavolt his hideout for over the weekend so he has a quiet place to murder those who tormented him in high school. Clash Reunion

Retrieved from "https://darkwingduck.fandom.com/wiki/Dr._Slug?oldid=24208"
Community content is available under CC-BY-SA unless otherwise noted.