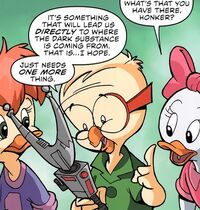 The downing rod is a technologically sound variant of the original magic-based dowsing rod. It was created to find the storage location of the ink that had infected the entirety of St. Canard.

The downing rod is an Y-shaped tool designed to detect the presence of large quantities of ink. It is based on the principle of the dowsing rod, but is held at the other end and built with scientific backing. It works at least partially with GPS technology. The most likely candidate for having built it is Gyro Gearloose, but Honker Muddlefoot finished it.

Honker, as leader of the group tasked with finding the basin of ink present somewhere in St. Canard, holds the responsiblity for the downing rod. The device is not yet complete, as it lacks a component to establish satellite connection. That's why Honker's first goal is to find the gadget a part like that, which comes in the form of an abandoned cell phone. With the downing rod completed, the group is led into the caverns underneath St. Canard where they find an entire lake of the dangerous black substance. Dangerous Currency, Part 2

Retrieved from "https://darkwingduck.fandom.com/wiki/Downing_rod?oldid=18259"
Community content is available under CC-BY-SA unless otherwise noted.