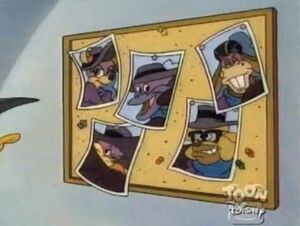 Dolphin is an agent of SHUSH and one of the organization's best to boot. As such, he has received personal training from Chief Agent Gryzlikoff. Being among SHUSH's cream of the crop, Dolphin is an experienced martial artist, a quality calculist, disciplined, and a team player.

Agent Dolphin is one of the recent SHUSH recruits. He's still not part of the big work, or at least not knowingly, but he's kept an eye on for the extraordinary skill he's shown during his testing period. He is, along with Agent Dodo, Agent Deer, Agent Donkey, and Agent Dog, one of the few agents currently being trained by chief agent Gryzlikoff himself. He may also have been a student of Darkwing Duck for a while.

Being an aquatic lifeform, Dolphin has to keep himself well-hydrated. This inconveniences him in a few ways, but nothing he can't overcome either on his own or through teamwork. He's an expert at water-based missions and combat involving water.

Dolphin is a greyish blue dolphin. He supposedly wears a grey suit as SHUSH agent. As member of the Darkwing Squad, he wears a variation of Darkwing Duck's outfit.

Retrieved from "https://darkwingduck.fandom.com/wiki/Dolphin?oldid=20679"
Community content is available under CC-BY-SA unless otherwise noted.