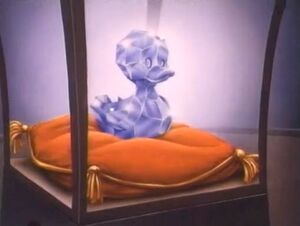 The Diamond Duck of St. Canard is the symbol of the city and is appropriately kept as the center piece in the art room within St. Canard City Hall.

The Diamond Duck is presumably as old as the city and possibly even older.

Tuskerninni and his penguins set their sights on the Diamond Duck. They stage their theft as part of a space opera and easily get rid off the guards by knocking them on the head with hammers. Their crime seems to be a breeze until Darkwing Duck appears. While Launchpad as Darkwing Decoy goes after the penguins, Darkwing chases Tuskerninni, who has the Diamond Duck with him, up to the roof. The gas gun's itching powder makes the villain lose his hold on the artifact and the gas gun's plunger function retrieves it. Darkwing has the upper hand, but the penguins have escaped Launchpad in a working UFO and come to their boss's aid. They knock Darkwing over the roof's edge and grab the diamond as he's knocked into. However, Darkwing lands on a horizontal flagpole and is launched back up. At the highest point, he spin-kicks the UFO and once more retrieves the Diamond Duck of St. Canard. The police arrives by then and Tuskerninni decides it's better to flee and leave the diamond be for now. Through circumstances, he gets the idea the next day to abduct Gosalyn and Honker and leaves Darkwing a note that he is to bring the Diamond Duck to the Canard Multiplex Theater in return for their safety and freedom. Darkwing thinks up a scheme to fight back, which includes Launchpad dressing up as Darkwing again and taking with him a glass imitation of the duck. This decoy should give Darkwing time to attack from within. Tuskerninni immediately sees that the diamond is a fake, but according to plan buys the Darkwing disguise. A Duck by Any Other Name

Retrieved from "https://darkwingduck.fandom.com/wiki/Diamond_Duck_of_St._Canard?oldid=16760"
Community content is available under CC-BY-SA unless otherwise noted.