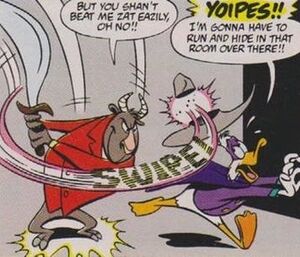 As the most attractive member of the Suits, Diamond is a hit with women wherever he goes for better or worse. He is loyal to Pokerface and a competent sword fighter.

Diamond is one of the four people brought together by Pokerface to form his gang. His favored weapon is a scimitar with a very broad blade. He and the others operate from Pokerface's office in One Chump Plaza Casino.

Diamond possesses a natural charm that marks him as a romantic target to many of the women that encounter him. He handles it with grace, even when the attraction is one-sided and ill-timed.

Diamond is a goat of some sort standing at medium height. He's got brown fur and wears a hot pink suit without pants.

The Suits assist Pokerface in a scheme to poison the water supply for One Chump Plaza Casino with gambleholic toxin to make the patrons spend all they have. Darkwing Duck picks up their trail when the kill the city controller and crashes Pokerface's office. The four beat and tie him and Launchpad up, then leave with Pokerface to the water tank on the roof. Darkwing won't stay put, though, and comes after them. Because Darkwing himself has fallen victim to the gambleholic toxin, Launchpad has to bet him he can't defeat them to make sure he has a chance. Diamond is the third to deal with the caped crusader, slashing at the hero and cutting his hat in two while Darkwing makes a run for it. He chases him to the ladies' room, where the door opening is blocked by a large patron. She spots Diamond behind Darkwing and, instantly taking a liking to him, jumps into his arms, squashing him. Feeling Flushed

Retrieved from "https://darkwingduck.fandom.com/wiki/Diamond?oldid=20661"
Community content is available under CC-BY-SA unless otherwise noted.