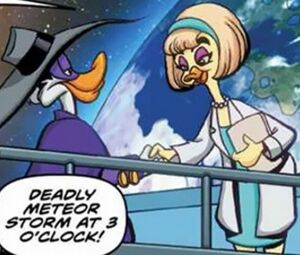 Doctor Desiree Bell is a scientist who has chosen to work on a better world and to this end joined SHUSH. Her intellectual input has been assigned to the organization's space projects.

As part of SHUSH's science department, Desiree Bell's qualities are put to the test whenever Earth is in peril. Her responsibilities at present are with the satellite headquarters and all cases it is expected to have a hand in towards a solution.

Bell is a collected individual with a social disposition. She thinks well of SHUSH's freelance agent Darkwing Duck, although this might be due to limited exposure to his vicinity.

Doctor Bell is a slender duck of average size with light yellow feathers, short blonde hair, blue irises, and a small beak. She goes dressed in blue and white, the latter mostly present in her lab coat.

After the fall of Taurus Bulba as secret puppetmaster of St. Canard, SHUSH confiscates his satellite headquarters and modifies it to serve as a "first response" staging area for global and extraterrestial trouble. Desiree Bell is one of the scientists in charge of the project and upon completion is made the facility's liaison to Darkwing. She welcomes him warmly to the crew, but gets pulled away from the pleasantries by the sight of Launchpad and Gosalyn destroying the Gorblatt Nebula with the station's lasers. They think they are playing a video game, which she hastily corrects them on. "Orange Is the New Purple, Part 1"