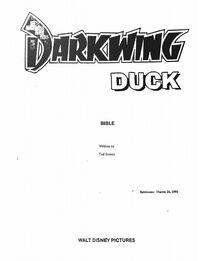 The Darkwing Duck bible is the show bible used in the production of the Darkwing Duck cartoon. It was written and periodically revised by Tad Stones. In its presumed final form, completed on March 26, 1991, it is 21 pages long and contains information on the premise of the series, the spirit of the series, Darkwing's equipment, the main cast, the supporting cast, the main villains, and important heroic colleagues of Darkwing.

Only the contents of one version of the Darkwing Duck bible are known, while the number of bible versions are unknown. The known version is the one of March 26, 1991, which was finalized only a few days prior to the Darkwing Duck preview run on the Disney Channel April 7, 1991.

This version of the bible makes mention of episodes up to "My Valentine Ghoul" through appearance lists for secondary characters, which probably means that up to "Dances with Bigfoot" (which features no secondary characters and is the last episode of the fifth batch) was being worked on at the time of the revision, suggesting that the sixth and final batch of 13 episodes of the original development run was worked on after March 26. Those began airing on February 27, 1992 with "Time and Punishment".

The bible makes mention of numerous details most of which are trademark elements of Darkwing Duck. However, a handful of details are very specific and only brought up once or twice.

There's a few rare bits of information to be gathered from the bible. Firstly, a few episodes are listed under different names than they were released under. "Quack of Ages" and "Life, the Negaverse and Everything" have mere placeholder descriptions that reveal some of the thought process behind them, namely "a medieval story" and "a reverse universe story", while the next seven episodes were once called as follows "Just Us Justice Ducks" - "Justice Ducks for All", "It's a Wonderful Leaf" - "A Bushroot Christmas", "Comic Book Capers" - "Comic Book Classic", "Whiffle While You Work" - "Toying with Disaster", "My Valentine Ghoul" - "A Darkwing Valentine", "The Merchant of Menace" - "Smooth Sale-ing".

Another point of interest are pieces of dialogue used as examples. Most of these do not occur in any episode, but some do, suggesting these are either eliminated lines or parts of rewritten or thrown-out scripts. There's a few second lines of introduction catchphrases listed, which include "I am the penalty for early withdrawal!", "I am the combination lock on the vaults of justice!", "I am the road salt that rots the underside of your car!", "I am the lead actor who wants to renegotiate his contract!", "I am the spider that creeps down your neck!", "I am the winning lotto ticket you can not find!", "I am the hangnail that will not be clipped!", and "I am the scrubbing bubble on the bathtub ring of crime!". The "penalty"-line is in "Calm a Chameleon", the "combination lock"-line is in "Dirty Money", the "road salt"-line is in "A Duck by Any Other Name", the "spider"-line is in "Water Way to Go", and the "scrubbling bubble"-line might be a variation of "I am the soap scum that lines your bathtub!" in "Dry Hard". The "lead actor"-line, the "winning lotto ticket"-line, and the "hangnail"-line are of unknown origin. The "lead actor"-line may have been meant for a Tuskerninni episode. There are also two pieces of in-scene dialogues. One has Launchpad convince Darkwing to go on a date with a woman named Gert so as not to hurt her feelings. Nothing like this ever happens in the cartoon. The other sees Darkwing and Launchpad trying to escape a vault some crooks locked them up in. Darkwing tries to master a welding torch disguised as a cigarette lighter for this, which obviously does not go painlessly for him. His intro to the scene is "I'll soon reduce this door to a meaningless mass of molten metal mincemeat". Nothing like this ever happens in the cartoon either.

Retrieved from "https://darkwingduck.fandom.com/wiki/Darkwing_Duck_(bible)?oldid=23480"
Community content is available under CC-BY-SA unless otherwise noted.