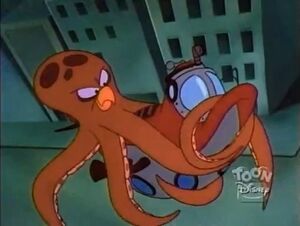 Darkwing's submarine is an aquatic vessel that sees oddly limited use for being kept in area with lots of water. It belongs to Darkwing Duck.

The submarine is one of Darkwing's many gadgets to solve cases and go after criminals. Between SHUSH and Launchpad, he probably received it from the former because Launchpad has no technical history with anything but aircrafts.

With St. Canard flooded due to a floating island clogging up the river mouth, Darkwing Duck and Launchpad man the submarine. Their intention is to record the melodies from Neptunia's trumpet so they can play them in reverse and get her whale to remove the island. The recording bit goes as planned, but Launchpad accidentally plays the sound before they get out of Neptunia's vicinity. She sics Billy on them, who squeezes the heroes out of the vessel with force. Neptunia follows and she attacks them. During the fight, Darkwing breaks her trumpet with his gas gun, leaving her at his mercy but the city still at hers. Neptunia agrees to cancel her master plan after Launchpad begs her to, but without trumpet she can't call the whale. Darkwing recalls the recording left in the submarine, but because it has sunk, he and Launchpad can't get to it anymore. This is no problem for Neptunia, who dives to it to give the whale the new instructions. "Something Fishy"

Retrieved from "https://darkwingduck.fandom.com/wiki/Darkwing%27s_submarine?oldid=19688"
Community content is available under CC-BY-SA unless otherwise noted.