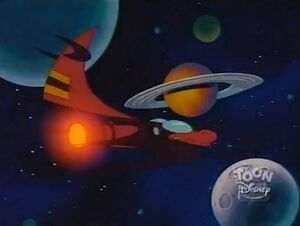 Darkwing's spaceship is a space vehicle belonging to Darkwing Duck. It has the same general configration as the Thunderquack, but is much larger with a long tail and a bulging cockpit. There's an airlock at the front of the lower beak.

Darkwing's spaceship is Darkwing's one vehicle capable of space travel. Its creator would most likely be SHUSH, as the organization has a space program that has also produced vehicles like the Stealth Shuttle. "Bad Tidings" At the same time, it is modeled after the Thunderquack, which is Launchpad McQuack's creation, "Darkly Dawns the Duck" and depends on the top of Darkwing Tower opening to leave. SHUSH does not know where Darkwing's base is, so this feature would have to be Launchpad's addition. It is very well possible the spaceship represents a rare cooperation invention, a status only realistically shared with the Flashquack. "Water Way to Go"

As with the Thunderquack, Darkwing leaves the piloting of the spaceship to Launchpad. The spaceship got destroyed during one case and it is unknown if it was fixed thereafter. "When Aliens Collide"

Retrieved from "https://darkwingduck.fandom.com/wiki/Darkwing%27s_spaceship?oldid=17661"
Community content is available under CC-BY-SA unless otherwise noted.