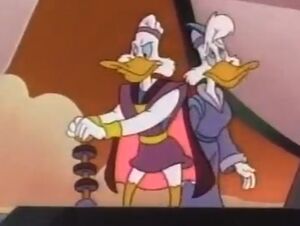 Darkwing's parents, of which the husband is named Drake-El, are a set of upstanding citizens that gave birth to Darkwing. They have a good, loving marriage and provide a healthy environment for their son to grow up in.

The mother is voiced by Zelda Rubinstein and the father by Jim Cummings.

Darkwing's parents are inhabitants of Zipton, one of the many planets out there in the universe. Their marriage is a quality one and they care greatly for Darkwing. When they had to choose who of them would live at the cost of the other two, they chose for their son to be saved without a moment of hesitation.

Both the woman and the man are kind-hearted, caring, and in general the type of people one is surprised to find to exist outside commercials. Drake-El is inventive, but a first degree klutz.

In a questionable retelling of the Darkwing Duck mythology, Drake-El confronts his brother when he threatens to blow up Zipton if he isn't made leader of the entire planet. The brother has built a bomb to go with his threat, but doesn't actually mean to risk destroying everything and everyone. Drake-El, however, accidentally sits on the detonator. Now that the planet is doomed, he rushes home to his family and a rocket he has built that can save one of them. It's an easy choice that the baby gets to escape to Gribblefritz. To ensure his future safety, Drake-El gives him an army blaster that belonged to the baby's great-grandfather to keep with him. The Secret Origins of Darkwing Duck

Retrieved from "https://darkwingduck.fandom.com/wiki/Darkwing%27s_parents?oldid=20673"
Community content is available under CC-BY-SA unless otherwise noted.