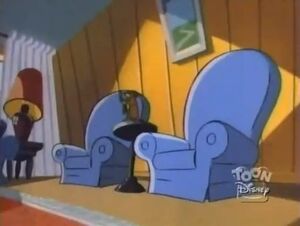 Darkwing's chair set is Drake Mallard's in and out of the crimefighting business. It consists of two blue chairs that are made to spin by pushing the head of the bronze statuette on the table between them. Naturally, it is inconspicuously part of the furniture of 537 Avian Way.

Upon hearing of the theft of a ship, a power station, and the KDUQ radio tower, Drake Mallard tells Launchpad McQuack they are leaving to investigate. Gosalyn demands to be allowed to come, but Drake doesn't budge. Promising to be back by dinner, he pushes the statuette's head down and the two are out in the streets on the Ratcatcher in seconds. "That Sinking Feeling" One night, Darkwing and Launchpad return from an exhausting shift of crimefighting. Darkwing doesn't get further than the couch, while Launchpad never even gets up from his chair. They have a few hours of sleep by the time Gosalyn and Honker enter the living room, ready for a promised day of Goony Golf. With the adults sound asleep, Gosalyn slams a golfball through the backrest of Launchpad's chair, missing him by a few centimeters. When this is not enough, she wrecks the rest of the living room until they go. "Getting Antsy" Gosalyn and a Flarg-possessed Honker return to the Mallard residence from an evening alien hunting through the chair set. Once Gosalyn figures out what trouble they've brought with them, she flees by means of the chairs to Darkwing Tower to get Launchpad's help. "Battle of the Brainteasers" After being contacted by J. Gander Hooter via the coffee table about F.O.W.L.'s latest act of terrorism, Darkwing plans to go to Darkwing Tower to fetch the Thunderquack. Gosalyn points out that he has to take her and Honker along, as the adults have switched bodies with the children and F.O.W.L. isn't going to take two children seriously. Darkwing agrees. Gosalyn and Honker pick up the adults-in-child-bodies and sit down in the chair set to leave for the secret hideout. "Trading Faces" Darkwing has lost his confidence after going blind, but Megavolt is still on the loose. His team knows he still has what it takes to stop any criminal, so they ask him what he'd do to locate Megavolt if he'd still were a crimefighter. As he anwers, they guide him to the chair set and get the four of them settled. Once Drake has given them all the information they need, Launchpad hits the statuette and they are off, much to Drake's surprise. "Duck Blind"

Darkwing and Launchpad return from a SHUSH delivery in the Swiss Alps. Having volunteered as a norma ray test subject, Launchpad has acquired psychic powers and immediately gets up from the chair to get a lamp out of the way before an incoming Gosalyn can break it. After some more demonstrations of his power, more bad than good, Darkwing has them return to the Swiss Alps to get the ray's effect undone. Just before they hit the statuette, Launchpad relays that they have to hurry as thieves are soon to arrive there too. "Heavy Mental" Some time later, Darkwing and Launchpad return home from a fruitless night of looking for a bank robber. "Easy Come, Easy Grows" Another night, Darkwing is out alone and gets split into two by Megavolt, resulting in Posiduck and Negaduck. The two halves are unaware of each other due to a smoke curtain and return home without another thought on the matter. Posiduck gets home first through the right chair, greeting Launchpad and Gosalyn with unusual kindness. Negaduck follows soon after through the left chair, greeting them with unusual harshness. It takes a moment for everyone to put two and two together. "Negaduck" Drake agrees to teach Honker to stand up for himself and sets up a therapist session in the Mallards' living room for this purpose. Honker gets the couch, he gets the right chair. Only shortly in, he hands Honker a book, The Darkwing Duck Assertiveness Training Course, to help him further while he and Launchpad man the chairs to get to the Ratcatcher and stop a robbery at Ink Incorporated. "Calm a Chameleon" Gosalyn and Honker are watching Nightmare on Pelican's Island with a big bowl of popcorn from the chair set when it's time for the commercial break. They stop watching when the adults return home and Drake is in a decidedly bad mood. It gets worse shortly after when the household gets a surprise visit by Fenton Crackshell, a friend and former coworker of Launchpad. He barges inside and explains the reason of his presence in St. Canard as he leans against the statuette, activating the chairs. Coincidentally, he is just looking the other way when they spin, only noticing a draft. Drake quickly guides him to another part of the living room where he's not a risk to Darkwing's secret identity. Launchpad accidentally invites him to be their guest for the time Crackshell'll spend in St. Canard and a crime-in-progress at the movie theater prevents Darkwing from getting the invitation undone. He and Gizmoduck end up in conflict over the case, which makes Drake double sour when he gets home and has to deal with the guest. When Fenton gets to the kitchen to get more ice cream, Drake gets to one of the chairs and leaves to continue the case. Fenton, of course, asks where his host has gone, and Launchpad blurts out that "he went for a spin", earning two disapproving glares from the children at that pun. "Tiff of the Titans"

Launchpad is asleep in the right chair. "Film Flam" "Adopt-a-Con" The chair set exists too in the Negaverse. Darkwing uses it to get "home", where he finds the set and the rest of his furniture in terrible state. "Life, the Negaverse and Everything" During Gosalyn's, Honker's and Tank's attempt to start a band, their noise is loud enough that all of the furniture, the chair set included, reverberates along. Drake eventually puts a stop to it and that night its quiet. With no crimes being committed, Launchpad gets cozy in one of the chairs to attend to his button collection. Drake eventually puts a stop to this too by ordering a patrol even if it seems pointless. "A Revolution in Home Appliances" In a potential future, there's a museum collection of all of Darkwing's stuff, including his costume, the Thunderquack, the Ratcatcher, a miniature version of Audubon Bay Bridge, and the chair set. During a tour, Gosaloid and Honkulon sit down in the chairs. Gosaloid accidentally presses the statuette's head and the two children are spun down into the display's compartment. They are stuck for seven hours until the "janitor" accidentally frees them. "The Secret Origins of Darkwing Duck" After a bad dream in which he imagined being dead, Drake is elated to still be alive. He runs down from his bedroom to the living room to express his happiness about still existing by pointing out all his furniture, the chair set included. "Dead Duck" During Christmas, the chairs are used to store unused decoration. As well, Gosalyn finds her father's old sled and glides with it from the stairs, launching herself through the living room. Among others, she knocks over the table between the chairs. "It's a Wonderful Leaf" After an intense workout to build some muscle, Launchpad slumps down in one of the chairs while Drake acts like they should be able to keep going. "The Incredible Bulk" In an attempt to achieve inner calmness, Drake attempts yoga in the living room. A fly's buzzing disturbs him and his attempts to squash it the regular way fail, although he does knock over the table and the statuette. He gets about seventy sticks of dynamite to blow up the fly, uncaring what it does to the living room. All gets destroyed, but the fly survives unscathed. Gosalyn and Launchpad urge him to get professional help, so he does. However, he ends up brainwashed by Megavolt's and Quackerjack's relaxitron. He returns home in a permanent relaxed state through the chairs. "Stressed to Kill"

Drake is reading the newspaper in one of the chairs while Gosalyn pesters him about becoming his sidekick while Launchpad is on vacation. "Dances with Bigfoot" One night, Darkwing's latest gadget, the D.R.A.T., reports on a crime at the botanical research lab. Darkwing and Launchpad head to the chairs and Gosalyn wants to come along, but Darkwing informs her she is grounded for earlier bad behavior. Gosalyn, disobedient as ever, makes her way over by skateboard and ends up mutated into an all-consuming slime creature. The very next time a crime is reported on, Darkwing chooses to bring her along on account of not wanting to come home to an emptied house. "Slime Okay, You're Okay" Gosalyn is pushing her new Quiverwing Quack persona and Honker is cast as her sidekick the Arrow Kid. Webra Walters reports on Negaduck's attack on Pepe's Pizza Tower, so Quiverwing Quack heads to the chairs to go, but Darkwing stops her, reminding her she only gets to go in the company of adults. Quiverwing is fine with that and the four head out, but get utterly defeated by Negaduck. Once home, Darkwing and Quiverwing promptly get in an argument. Launchpad and Honker find the clashing egos entertaining, but opt to leave back through the chairs to air their clothes and give the main heroes some space. "The Quiverwing Quack" When Gosalyn tries to earn herself a video game by getting money from recycling, it's only a matter of time before she starts taking everything with the Mallard residence and Darkwing Tower to sell off. The chair set is largely spared, except for the statuette and some technical components. Darkwing and Launchpad find that out the hard way when they try to reach Darkwing Tower to stop a crime at the museum. "Dirtysomething" intergalactic harmonizer "The Revenge of the Return of the Brainteasers, Too!" "Star Crossed Circuits" 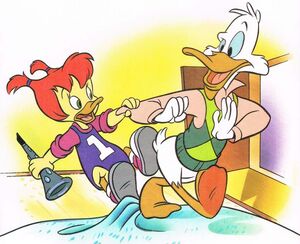 Upon hearing of a robbery at Rockefeather Mansion, Darkwing and Launchpad say goodbye to Gosalyn and head out to the Ratcatcher through the secret door in the wall. "High Wave Robbery"

As Darkwing Duck and Morgana Macawber discuss the army of "Darkwings" invading St. Canard, one by the name of Quiverwing Duck spies from outside the house and discovers an entrance to the tunnel system behind the chair set. He uses it to infiltrate the house, catching the hero off guard, and nail him to the wall with three arrows. "Crisis on Infinite Darkwings, Part 3"

Retrieved from "https://darkwingduck.fandom.com/wiki/Darkwing%27s_chair_set?oldid=28763"
Community content is available under CC-BY-SA unless otherwise noted.